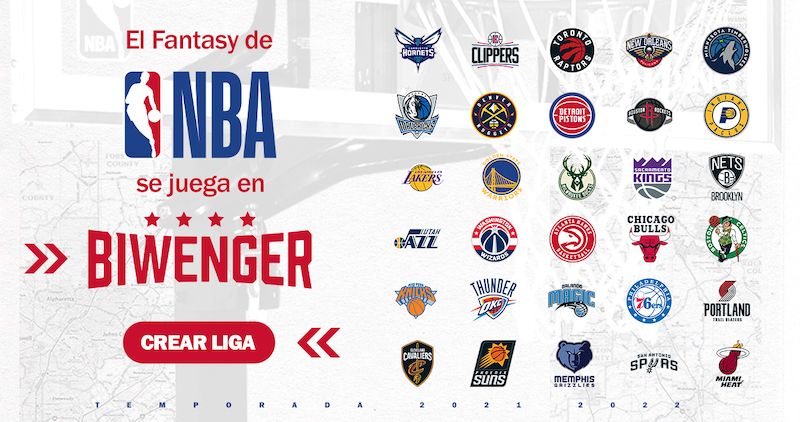 How little is left for us to enjoy another exciting NBA season, manager! After announcing last season that Biwenger became the Official Fantasy

How little is left for us to enjoy another exciting NBA season, manager! After announcing last season that Biwenger became the Official Fantasy of the NBA in Spain, and after the success it meant with a very great reception by thousands and thousands of managers, we communicate that you can live the NBA season 21/22 in Biwenger from now on.

At Fantay number 1 bet on the best competitions in the world. Recently Euroleague started, also available from Biwenger, and this Friday there has been the general restart of NBA leagues in Biwenger so you can start prepare your team for October 19, start date of the season.

Antetokounmpo, Jokic, Harden, Doncic, Lebron James, Ricky Rubio… How many times have you dreamed of having so many stars together on your team? Well do your dreams come true creating a league with your friends and enjoy the Official Fantasy of the NBA in Spain in an easy and intuitive way !!

Each day will last a week, that will go from Monday to Monday except for possible exceptions, and whose exact beginning and end you can see in the Calendar found in the Home tab. You must select in your lineup 5 starters, a sixth man and 4 reserves. All will score, although from the sixth man you will receive the 75% of their final score and of each of the 4 reserves the fifty%. The points assigned to each player will be obtained through the average of all matches played during that week. Also, the scoring system will be the official statistics of the NBA.

Do you think that’s it? Evidently could not miss the Biwenger Official NBA League in which you can compete against thousands of basketball lovers and You will have a prize if you finish in the top 10 at the end of the season.

Now it’s up to you to prove that you are the King of the field. !Sign up now for the Official NBA League in Biwenger and remember that the best basketball in the world you only live in fantasy number 1!

Loading...
Newer Post
“Thuram never left the country when they called me son of a ***”
Older Post
A new edition of the charity “Copa del Rey” golf – Sports Center