PlayOffs NBA 2022: ‘War of the Gods’ in the seventh game: Giannis against Boston and Doncic’s impossible 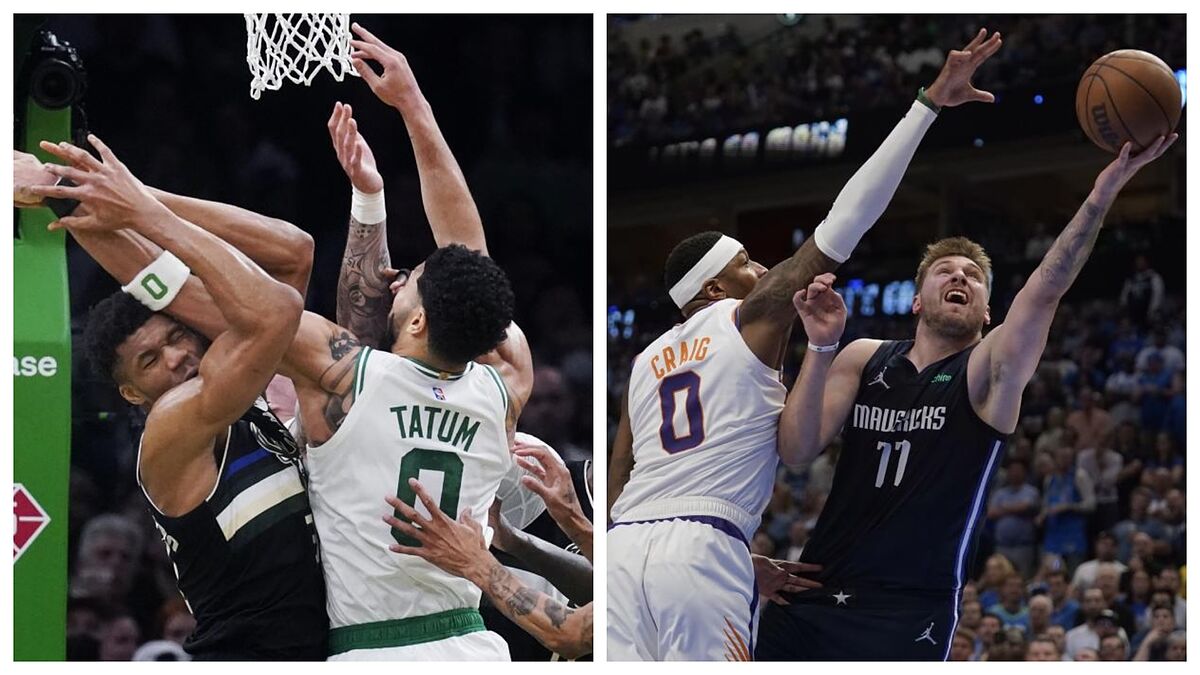 'win or go home', 'mata-mata', at school it will be a 'he who scores wins' (or something like that). After uncertain forecasts, even series and a

PlayOffs NBA 2022: ‘War of the Gods’ in the seventh game: Giannis against Boston and Doncic’s impossible

‘win or go home‘, ‘mata-mata’, at school it will be a ‘he who scores wins’ (or something like that). After uncertain forecasts, even series and a lot of high-level basketball, the NBA lands in its seventh games. That unparalleled status of the Playoffs, which in Conference semifinals is presented as a ‘War of the Gods’: Boston Celtics – Milwaukee Bucks at the TD Garden and Phoenix Suns – Dallas Mavericks at the Footprint Center in the city of Arizona.

In the 2022 post-season, a ‘Game 7’ had not been experienced in the first round. Yes, in the last Playoffs, in which, curiously. there were also two in the conference semifinals. On June 19 with the famous game between Brooklyn and Milwaukee with Kevin Durant stepping on the triple, and the next day between Philadelphia and Atlanta marked by Joel Embiid’s criticism of Ben Simmons. Interestingly, they also exemplify what the NBA is from one season to the next.

A year later the NBA leaves two seventh games between candidates for all. The East more than any other, with the Boston Celtics and Milwaukee Bucks on a unique level of basketball throughout the course. And the one from the West makes it clear that it is a magnificent opportunity given the weakness of the Suns and Warriors, theoretical favorites.

Boston Celtics – Milwaukee Bucks: the battle of the Garden

The duel of duels. There is no series in the NBA like the confrontation between champion and contender. The wonderful 3-3 of the Celtics and Bucks exemplified two teams that worked hard and improved game by game. The holders of the ring had in their hand to pass with the court factor, but a Tatum ‘in Kobe mode’ tortured them with 46 points and a survival exercise in the last period.

The seventh should be a ‘trace’ of what was experienced in the previous six. Close, tough and with Giannis forcing the machine against the best defense in the league, and some Celtics moving the ball, finding the ‘Jay’s’ and trying to be more efficient. With a 40% effectiveness they suffer, more with a short rotation.

It will be decided in the ‘Disneyland’ of the NBA Playoffs, the TD Garden. Legendary pavilion, who lives for the Playoffs and connects with a team that showed in the fourth and sixth that they are all heart. Vintage players face to face, with a Tatum against Giannis in the most anticipated final decision.

If the Eastern series is equal and champion candidates, the Western series in its ‘Game 7’ turns the tables. It is irregularity Luka Doncic and disappearance of the Phoenix Suns arguments. The best team in the NBA in its regular season has not played its best basketball in the post-season. It happened to them in the first round against the Pelicans and the semis make it clear that there will be a battle in Arizona.

A lot of blame is due to the lack of influence on Chris Paul’s game throughout the series. He is the metronome of Phoenix, given that Booker is not 100% fit, although he does make a difference and Bridges has to ‘deal’ with Doncic on defense. 9+6+4 is his ‘stat line’ in the series, poor and with few shots. Although the break before the seventh may seem fundamental.

A magnificent Doncic forces the seventh between Dallas and Phoenix

And in another dimension is the Doncic factor. The Slovenian averages 39 points in games ‘against the wall’, as they call it in the United States terminology. In other words, when he plays go home he is around to score 40. In a minimum of three games. His level continues to rise, the physical section improves, and he is becoming more decisive despite not being in tune from the perimeter.

Doncic lives a complicated comeback to more not to be able, but it is also his opportunity to be able to play for the ring with some Mavericks without so many arguments of ‘contending’ with the NBA. The Suns have been better in their good games, without much equality, but much of the tie will depend on the defensive concentration and the success of the Slovenian in attack.

It is not yet, but little by little the jewelery begins to come into play in the NBA. The Gods, at war, against the wall and a failure to go home. Perfect incentives for maximum curiosity in the best basketball on the planet. Miami and Golden State await them, comfortable after their work.

Tags: basketball / nba / playoffs, NBA playoffs
PlayOffs NBA 2022: Alarm in the Grizzlies: Ja Morant can miss the rest of the playoffs
Heat-Hawks: A hulking Butler leaves the Hawks shivering
PlayOffs NBA 2022: Trae Young does not give up: he brings the Hawks to life when the Heat were already singing 3-0
NBA 2540