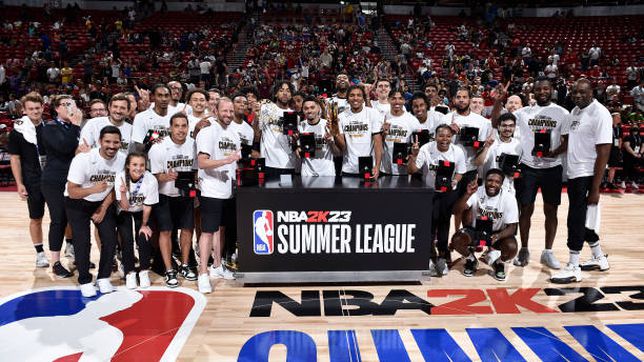 Watford was named the Most Valuable Player of the Summer League championship game after recording 19 points, seven rebounds, three steals, two assists and a blocked shot. The forward was 7-for-15 shooting, 3-for-6 on 3-point shooting.

For his part, rookie Jabari Walker had a solid double-double for the Blazers off the bench. The player recruited with the penultimate selection of the last Draft accumulated 14 points and 11 rebounds.

Although five New York players scored in double figures, the Knicks pinned their hopes on Quentin Grimes, but the shooting guard had no accuracy on his long-distance shots (2/11) despite adding 19 points.

YOU MAY BE INTERESTED: LeBron James denounces racism in Boston

The Las Vegas Summer League is an NBA event that has been played since 2004 with the aim of giving first-year players and those with little experience a showcase. An annual champion has been defined since 2013, with the exception of the 2020 season in which it was not played in Las Vegas due to the coronavirus pandemic.

With their victory today, the Trail Blazers became the second team with two Summer League championships. The Portland franchise also won the 2018 edition.

Kevin Durant has had enough of the Nets but it is not clear that he can leave
NBA: Cavs continue to amaze and stop Bulls in their tracks
NBA Free Agency 2021: Kyle Lowry leaves Toronto and reaches a three-year deal with the Heat
NBA 3166