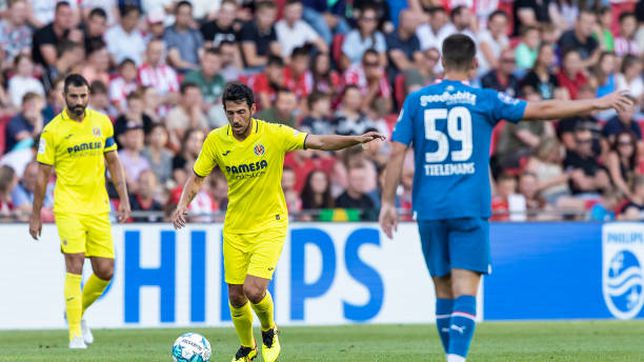 SUMMARY OF THE DAY On this Saturday full of games, the great winners of the night of the national elite have been Mallorca, Espanyol, Valladolid a

SUMMARY OF THE DAY

On this Saturday full of games, the great winners of the night of the national elite have been Mallorca, Espanyol, Valladolid and Villarreal. The first three have won their respective duels (against Wieczysta Krakow, Montpellier and Tordesillas respectively) without conceding a single goal and the submarine has been able to come back to PSV thanks to goals from Yeremy Pino and Jackson. The most attractive duel was the Seville (vs Tottenham), which ended in a draw after goals from Kane and Rakitic. goalless draw between Betis and Gronig, in a game in which many details of Luiz Henrique were seen. Resounding defeat of Rayo (3-0 against Freiburg) and Getafe (2-0 against Leganés). La Real fell at home with a late goal from Toulouse.

From the silver category Ponferradina and Alavés fulfilled. The bercianos prevailed in the derby of the Ancares and the babazorro block with Owono as penalty shootout hero, stopping two of four shots at Burgos. The Eibar triumphed in Calahorra (0-2) and the Malaga took the worst part after hosting Hull City (1-3).

Finally, on the international scene, it is worth highlighting the Leipzig win (3-1 to Southampton) and the huge goal by Ilaix Moriba. He also won the Milan the Telekom Cup to Cologne (1-2) with two goals from Giroud and an assist from Brahim. The Inter was able to draw in Monaco a game that was losing 2-0 after half an hour: Gagliardini and Asllani neutralized the initial goals from Golovin and Ben Yedder.

Seville admits that it suffered to sign Tecatito Corona
Mexican soccer players, with open doors in European soccer
“Did they fire him again? it is difficult to follow him because it happens every time”
FOOTBALL 3120