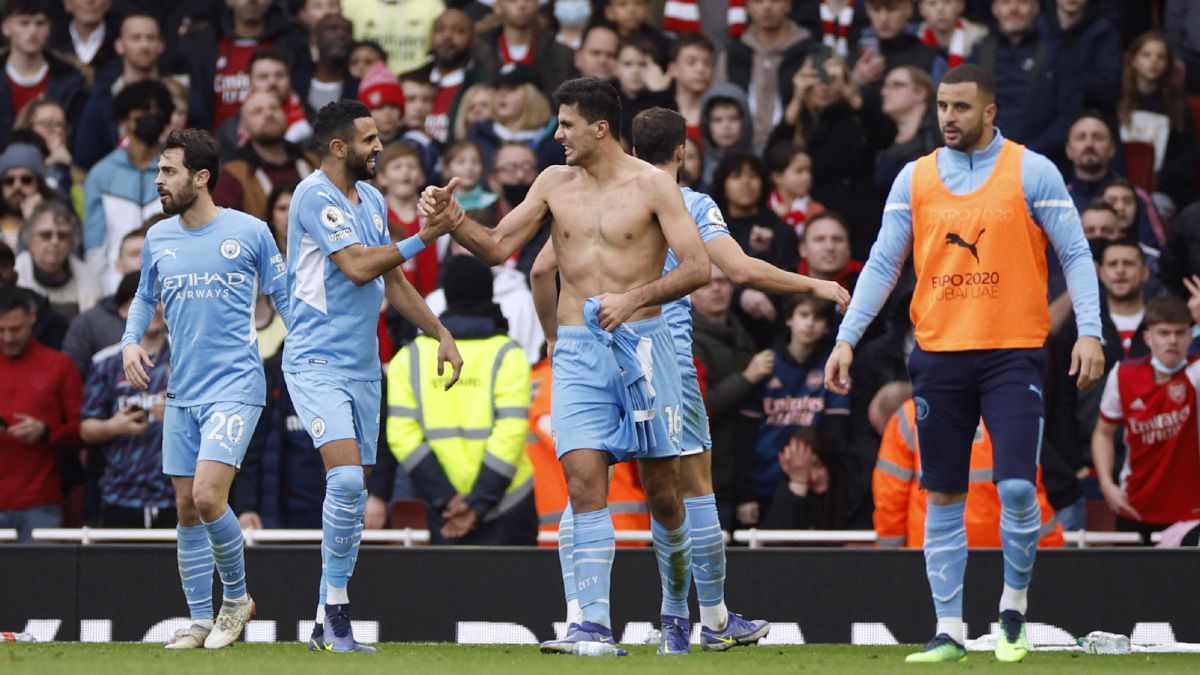 An asymptomatic positive in COVID It had kept him away from the team. He had lost the games against him Leicester and the Brentford. Of the last

An asymptomatic positive in COVID It had kept him away from the team. He had lost the games against him Leicester and the Brentford. Of the last nine workouts, he hadn’t done a single one. And after nine days without training, in the 93rd minute (in 92 and 28 seconds, specifically) he defined as a nine to turn the scoreboard and the victory to City against the Arteta’s Arsenal. Rodrigo Hernández Cascante, who in two and a half years has conquered the Premier with his football and his handling of the axis of creation and destruction of the Guardiola’s Manchester CityNow he also scores decisive goals.

At the moment of scoring the goal, Rodri was carried away by the euphoria of a goal in the minutes of extension and took off his shirt doing the incredible Hulk. And it was possible to verify the physical change that the Madrid footballer has experienced since his time at the Villarreal and the Atlético de Madrid. The increase in the muscle mass of your upper body is evident at first glance, a consequence of constant physical gym work. This increase in power and physical strength, together with his technical and tactical quality, has caused the fans of the City and the English specialized critics consider him the man of the championship in a choral team like the one that Guardiola has ridden this season at City.

Rodri has been chosen several games this season the best of the match. He began his great season with an exhibition at Stamford Bridge against Chelsea in which his performance was considered “a masterclass in midfield” by the Manchester Evening Standard, beating Kante and Jorginho. Against Manchester United he was elected Man of The Match.

The Manchester City has put the turbo towards a new league title. Rodri’s goal against him Arteta’s Arsenal, who deserved more with a first half in which he beat the cititizen, increases the advantage in the classification and faces the second leg of the competition as the absolute favorite to be champion. Guardiola has given another twist to its game model and City plays in phases with a system 1-2-3-5, with a beginning of the game and an occupation of the spaces with which he subdues the rivals. In that style of play, Rodri Hernández is vital to maintain the balance between defense and attack and lead the offensive and defensive transitions. This is done with great solvency by the Spanish midfielder. And on top of that, he even scored winning goals in the 93rd minute. Once the Premier league, the Madrid’s next goal is to perform at the same level with Spain at the end of the year in the Qatar World Cup.

Carlitos Tevez returned to playing soccer in Fuerte Apache, and the next day he continued with golf
Gambea presents 6 soccer jerseys inspired by the most historic neighborhoods of Valencia
Champions League matches for today, Wednesday, November 24 | Football | sports
FOOTBALL 1118