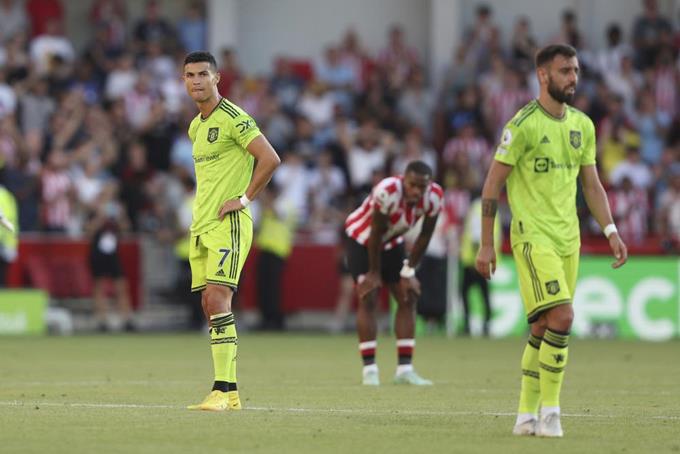 Manchester City, defending champion in the Premier League, and Arsenal continued their perfect start in the English championship b

Manchester City, defending champion in the Premier League, and Arsenal continued their perfect start in the English championship by beating Bournemouth (4-0) and Leicester (4-2), respectively, this Saturday on matchday 2, in which Manchester United is provisional bottom after losing 4-0 in Brentford.

Both ‘Citizens’ and ‘Gunners’ have accumulated 6 points in the standings and are sending a message about their ambition at this start of the season.

Their situation contrasts with that of a Manchester United that continues with zero points in the table, after losing 2-1 to Brighton on matchday one.

Manchester United haven’t conceded four goals in the first 35 minutes since May 1990, in a game against Nottingham Forest.

The situation is already worrying for the new manager of Manchester United, Erik Ten Hag, who could not hide the shortcomings of his team despite the tenure of Cristiano Ronaldo.

“I am very sorry for the fans, we have let them down. Brentford were hungrier and we conceded goals on individual errors,” Ten Hag lamented.

The Spanish goalkeeper David De Gea had a nightmarish afternoon, with a large part of the responsibility in the defeat, being especially misguided in three of the four goals received.

Brentford, with four points, is third in the standings.

United’s situation contrasts with that of its neighbor Manchester City, which beat Bournemouth 4-0 in the first game against its fans at the Etihad Stadium.

Josep Guardiola’s team already ruled in the first half, leading 3-0 at the break, with goals from German Ilkay Gündogan, Belgian Kevin De Bruyne and Phil Foden.

In the second half, City’s fourth goal went up a notch against Colombian Jefferson Lerma.

Norwegian star Erling Haaland, who scored a brace for City on matchday one, did not score on this occasion but provided the assist for Gündogan to lead the way to victory.

At the Emirates Stadium, in their 4-2 win against Leicester, Arsenal had their new Brazilian star Gabriel Jesus as the protagonist, since a brace of his (minutes 23 and 35) put the match on track.

Leicester approached a goal behind on two occasions, with a goal against William Saliba (53) and James Maddison (74), but on both occasions Arsenal responded quickly by reestablishing distances on the scoreboard, with goals from the Swiss Granit Xhaka (55) and fellow Brazilian Gabriel Martinelli (75).

“This is the mentality we want to have. To go to a different level you need this type of mentality,” celebrated Arsenal’s Spanish coach Mikel Arteta.

With 4 points, two behind Manchester City and Arsenal, they are in the table, along with Brentford (3rd), Newcastle (4th), Leeds (5th) and Brighton (6th).

Newcastle and Brighton drew 0-0, at home ground, while Leeds drew 2-2 at Southampton.

The two goals for Leeds were achieved by the Brazilian nationalized Spanish Rodrigo Moreno, who with three goals alone leads the table of top scorers.

In a duel between two teams that had lost on matchday one, Aston Villa beat Everton 2-1, while Wolverhampton and Fulham drew 0-0.

For Sunday is the star duel of the day, the Chelsea-Tottenham derby, while Liverpool plays on Monday, hosting Crystal Palace at Anfield.