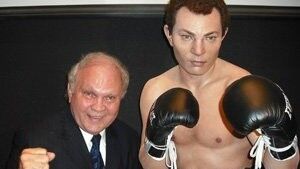 La world boxing organization informed the unfortunate death of Carlos Ortizmember of the Boxing Hall of Fame in CanastotaNew York.The day after Pue

La world boxing organization informed the unfortunate death of Carlos Ortizmember of the Boxing Hall of Fame in CanastotaNew York.

The day after Puerto Rico gained a new immortal in the International Boxing Hall of Famein the hands of Miguel Angel Cotto Vzquezheaven claimed one of the great Puerto Ricans installed in that venue since 1991.

The former world champion Carlos Juan Ortizone of the greatest figures in Puerto Rican and world boxing, died Monday in New York: He was 86 years old. The causes of his death are unknown.

Who was Carlos Ortiz?

Ortiz, who undoubtedly has his place among the five best Puerto Rican boxers of all time together Flix “Tito” Trinidad, Wilfredo Gomez, Miguel Cotto and Wilfredo Bentezwas the third Puerto Rican fighter to win a world title by defeating the American by knockout Kenny Lane, on June 12, 1959 in a fight held in Michigan in the super lightweight division.

Among some of the most important fights was the one he had against Ismael Laguna at the Panama National Stadium in 1965, and where he lost the World Boxing Council and World Boxing Association lightweight belts. They recovered both months later, defeating Laguna at the Hiram Bithorn Stadium that same year.

He culminated his brilliant career in 1972 with a loss to Ken Buchanan. at Madison Square Garden in New York.