Anxiety multiplies. The countdown to Qatar World Cup 2022 keeps fans waiting. Everyone wants to know every detail of the most popular sports even

Anxiety multiplies. The countdown to Qatar World Cup 2022 keeps fans waiting. Everyone wants to know every detail of the most popular sports event on the planet. That is why the focus is on how the ticket sales will be organized. At that point, FIFA has already begun to provide information and announced that from this Tuesday and until April 28, tickets can be purchased for the big event, which will be held between November 21 and December 18.

According to an official statement from the body that governs world football, in the new stage of ticket sales, fans will be able to buy tickets to watch up to two games per day. A second random selection sale period for the FIFA World Cup Qatar 2022 opened on Tuesday, following the final draw on April 1. Fans around the world already know who their team’s rivals will be and can now make their requests for the first big matches of the tournament, “explained FIFA.

A view of the iconic Lusail Stadium, where fans will be able to be from November 21 when the Qatar World Cup kicks offChristian Charisius – dpa

This sale window will run until April 28 and applicants will for the first time have the opportunity to order tickets that will be offered as supporter tickets and conditional supporter tickets, for those who declare themselves fans of a certain participating nation and want to sit with other fans of his team, indicates the official text. In addition, “fans will be able to reapply for individual match tickets and four-stadium season tickets, while accessibility tickets will be available across all products.”

During this sales period, ticket applicants may apply at any time, without having to provide details of any submission date preferences. If demand for a given match and/or ticket category exceeds the available ticket inventory for the domestic or international market, a lottery will be held to determine which applicants are allocated tickets.

Finally, FIFA reported that the types of tickets offered at this stage are the following:

For fans arriving in Qatar from abroad, individual ticket prices for the first phase range from USD 68.5 to USD 219 for a match. For the final, they will be between USD 603 and USD 1,604. Ticket fares reserved for local residents are cheaper, ranging from USD 11 to USD 205 per unit. This represents an increase of 30% compared to Russia 2018. 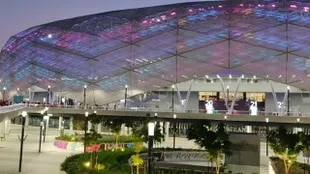 Education City Stadium Qatar, another of the venues that fans will be able to attend

Tickets will be sold in Qatari riyal (Qatar’s official currency, equivalent to USD 0.27) for both Qatari residents and fans around the world. Ticket categories 1, 2 and 3 are available to all applicants.

For the first stage of ticket sales, 804,186 tickets were allocated and were sold from January 19 to February 8, when there were 17 million requests. In total, there are just over 3 million available (2 million for sale and 1 reserved for FIFA and its sponsors). As reported by the agency, Qatar, USA, England, Mexico and the United Arab Emirates are the five main ticket buyers so far.

Practical guide for Eintracht supporters to buy a ticket
schedules, where are the concerts and how to buy tickets
Peru eliminated from Qatar 2022 cost tickets for the World Cup, price and where to buy
TICKETS 100