Qatar, protagonist in the new order of world football 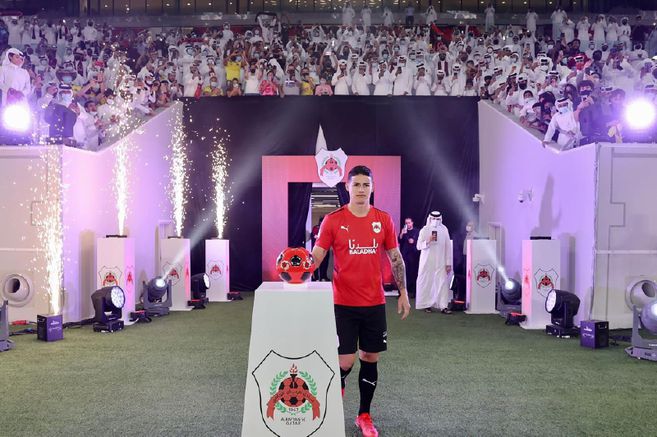 Although it seems, or in Colombia we believe it, Qatar is not a supporting actor in the new order of world football. Especially since this sport s

Although it seems, or in Colombia we believe it, Qatar is not a supporting actor in the new order of world football. Especially since this sport stopped being a game to become one of the industries that moves the most money and an instrument of political power without equal.

It may interest you: all sports information

The surprise arrival of James Rodríguez to the Al-Rayyan club, with which he signed a contract until the end of 2022, forced us this week to look to the Middle East and explore a country that is as exotic to us as ours to much of the world .

James M. Dorsey, an American academic and journalist expert in international studies and ethnic and religious conflicts, explains better than anyone the reasons why Qatar decided, a decade and a half ago, to become actively involved in the most popular sport on the planet: “Diplomacy evolved . And it is not in charge of the foreign ministries. Now it is public, economic and cultural. And football is an instrument to reach an entire community to which, as a country, it would never reach ”.

Main member of Play the Game, an organization that seeks to promote democracy, transparency and freedom of expression in sport, says that “Qatar has been trying to make football part of its national identity for a long time. It is a matter of reputation, but also a security and defense strategy. It is a small, vulnerable country that has recently achieved recognition everywhere and alliances that can serve it at any time ”.

And to achieve this he has had unlimited resources. So many that it “won” the election to host the 2022 FIFA World Cup, despite having obtained the lowest score among the candidate nations. In order to overcome Australia, Japan, South Korea and the United States, Amnesty International’s complaints about labor abuse and discrimination in that country did not matter, nor its little football tradition or the extreme weather conditions to which the protagonists would be subjected. Neither do the diplomatic scandals with their neighbors and the corruption investigations in Europe and North America. Despite all the revelations from Fifagate and accusations of bribery to vote in his favor, Qatar went ahead and thanks to the backing of its soccer leading friends it will have its World Cup. In fact, it is already ready. According to the heads of the organization of Qatar 2022, Nasser Al Khater and Hassan Al Thawadi, “the eight stadiums are already finished and the total infrastructure works are about 95%. There are only small details of urban planning in the surroundings of the stages ”. If in the logistical aspect there is no uncertainty, in the sports sector there is. The COVID-19 pandemic forced to modify the international calendars and the continental qualifiers are delayed. Only in mid-2022 will the names of the 32 qualifiers be known.

Soccer has been played in Qatar since the middle of the last century, when that country was still under the protection of the British Empire. The Federation was founded in 1960, and only in 1972 was the first official league played. At the national team level, the greatest achievement was the surprising youth world subtitle, in Australia 1981, although in majors they won three Gulf Cups and the 2019 Asian Cup. In preparation for the World Cup, their team has participated as a guest in the Copa América and the Copa de Concacaf Gold.

(James Rodríguez at Al-Rayyan: “The most important thing is that I will be able to play”)

But if sportingly, Qatari football and that of the Arabian Peninsula countries in general has nothing to brag about, at an organizational and business level it does. Millionaires in the region have acquired or sponsor several of the most important clubs in the world. The Qatar Authority fund to Paris Saint-Germain and Mansour bin Zayed to Manchester City, for example, although there are about 20 families that have some type of investment in Europe, such as Kas Eupen, of the second division of Belgium, and the Cultural Leonesa, the third in Spain, teams to which they send young players to learn and grow as professionals.

But they also have their own projects, such as the Aspire Academy, based in Doha, which is classified as the main training of elite athletes on the planet. It has the most advanced technology and an unsurpassed infrastructure. In addition to seven luxurious soccer fields, they have the Aspire Dome, the largest dome in the world with a capacity for 5,500 people. The sports city has a hotel, coliseums, laboratories, gyms, a medical center with all the specialties, restaurants and even shops.

The project, which houses schools for 12 sports and even administration, is funded by the government, a monarchy that has been run by the Al Thani family for more than 70 years. Qatar has the third largest gas reserve in the world, which makes it the country with the highest per capita income and the highest development index. No inhabitant pays taxes. And he has at his disposal the state channel Al Jazeera, whose tentacles reach the five continents and serve him to promote himself.

The Qatar Stars League is made up of 12 clubs, and several of them have hired world football figures in recent decades such as Romario, Pep Guardiola, the brothers Ronald and Frank de Boer, Fernando Hierro, Gabriel Omar Batistuta, Fabio Cannavaro, Juninho Pernambucano, Raúl and Xavi Hernández, although almost all in the twilight of their careers.

(From the emir: this is the team James will play for in Qatar)

That is why the arrival of James Rodríguez at Al-Rayyan attracted so much attention, because with just 30 years he should be able to compete at least a couple of seasons at the highest level. But given his situation at Everton, where coach Rafa Benítez did not take it into account, and the absence of real and attractive offers to be transferred to a club from another major league in Europe, the Colombian midfielder, who needs minutes to play. and continuity to recover his best form, he accepted the proposal that allowed him to continue feeling like a footballer and also a media figure, without sacrificing his economic benefits.

According to several of the Colombian players who have passed through the Qatari league, such as Ricardo Gato Pérez, Víctor Bonilla, Franco Faustino Arizala, Christian Nazarit, Johnier Montaño, Tommy Tobar, Hárrison Otálvaro, Charles Monsalvo, Ferley Villamil, Carlos Preciado and Jeison Medina, “for James, being at Al-Rayyan can be a good experience if he can adapt to the food, the climate and the culture, because it is one thing to go to visit and be discredited by the cities and the luxuries in the streets, and another to live from day to day ”.

That is precisely one of the concerns with the former midfielder from Envigado, Banfield, Porto, Monaco, Real Madrid, Bayern Munich and Everton, who in his career has had trouble accommodating himself in unfamiliar environments. In his media presentation, the 2014 World Cup scorer in Brazil was happy, motivated by the new challenge and focused on the sporting aspect: “It is a football that is growing a lot, a culture that pleases me. I can also grow and, the most important thing is that I will be able to play, which is what I like the most. I just want to be happy doing this. “

After speaking with his new coach, French World Cup defender Laurent Blanc, he added that “I am not comfortable or relaxed, I am here to win titles. I hope I can win everything I play and compete every three days. Help the team to play well and win, because in football, if you can’t win, it’s worth nothing. “

He signed a contract for one season, and according to journalistic sources he will charge seven million euros. And as time is short, at once he joined the training sessions of his new club: “I need a couple of days to train, get 100% physically and be able to play when the coach decides,” he said.

Al-Rayyan, who has played three games in the local tournament, with two draws and one defeat, five goals in favor and seven against, will play this Monday from 11:30 am against the colero, Al Khor. Although he already works in the field with his teammates and could act for a few minutes, everything indicates that the premiere of the Colombian 10 will be next Saturday, against Al Ahli. As he is blocked by coach Reinaldo Rueda for the triple elimination date for the 2022 World Cup against Uruguay, Brazil and Ecuador, from October 7 to 14, he would travel after that game in case his name is in the final call.