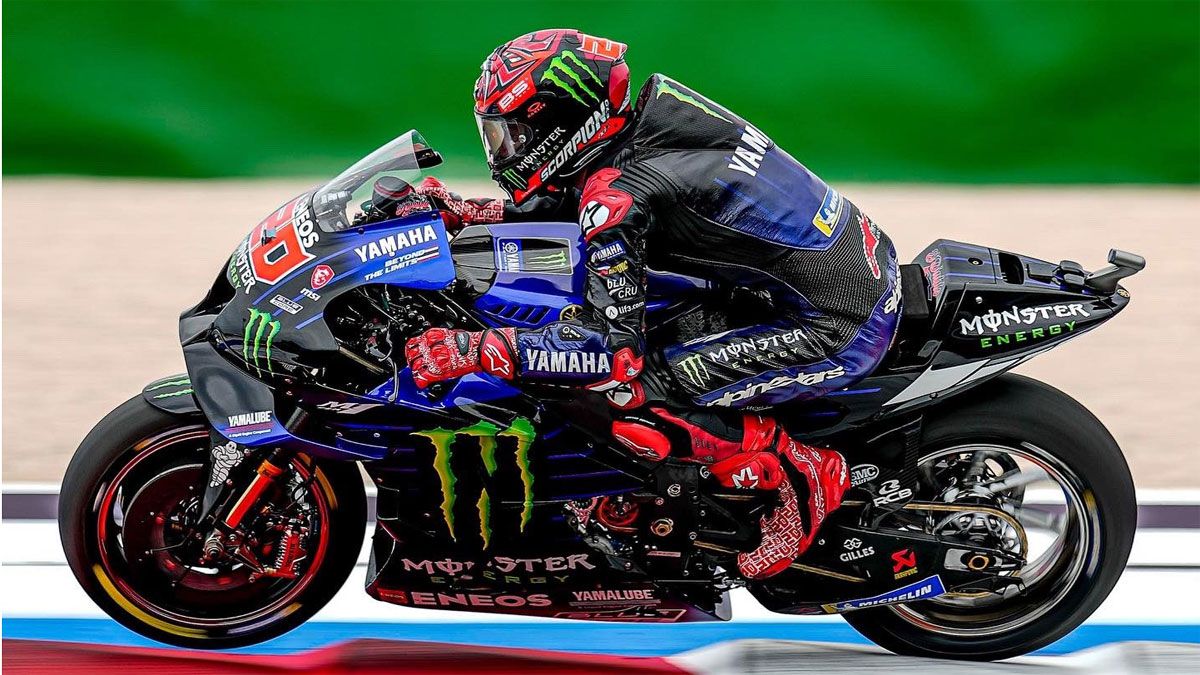 Fabio Quartararo (Yamaha YZR M 1) faces one of his most difficult commitments as of this weekend with the dispute of the Japanese Grand Prix of MotoGP at the Motegi circuit, after the “fiasco” on the first lap of the Motorland Aragón race.

Quartararo’s “zero” leaves him with just ten points ahead of the Italian Francesco “Pecco” Bagnaia (Ducati Desmosedici GP22), which stars in an absolutely “explosive” second part of the season, with five consecutive podiumsfour of them victories, although his compatriot and also a Ducati rider, Enea “The Beast” Bastianini, has interfered in that comeback.

Bagnaia is emerging as one of the most serious rivals, although not the only onein the fight for the 2022 world title, in which the mishap suffered by the Frenchman at the Alcañiz circuit has only added excitement to the final part of the championship, with five races in just seven weeks to elucidate the successor , if there is one, by Fabio Quartararo.

Thank you @YamahaMusic_Jp for the tour 💜@FabioQ20 had a great time trying the different instruments 🎧🎹🎷🎻 Which one suits him the best?#YamahaMusic | #MakeWaves pic.twitter.com/L4jVeuhoHf

In that fight there are a lot of other conditioning factors, the first being “Pecco” Bagnaia because of his situation in the points table, only tenBut is that Aleix Espargaró is at 17 points (Aprilia RS-GP), which, as he very well explains, every two for three is “stretching the gum” as much as he can and that is that the Aprilia, except for his discreet ninth position in Great Britain, fights grand prix after grand prix for being among the best in the category and is looking hard for a new victory to add to his record after the one in Argentina.

Aleix Espargaró has proven to be an excellent rider and to have a motorcycle practically on a par with the powerful Ducatiwhich has the widest representation in the MotoGP starting line-up, which has already allowed it to be mathematically proclaimed constructors’ world champion.

And criticized or not, at least the Borgo Panigale manufacturer’s policy of imposing team orders was and will be very “hackneyed”, as could be seen at Motorland Aragón, where Enea Bastianini overtook “Pecco” Bagnaia on the last lap to subtract five points from him in his private account and in the fight for the championship, in which “The Beast” Bastianini has entered, although he is further away, 48 points behind Quartararo when 125 points remain to be disputed.

The return to competition for Marc Márquez (Repsol Honda RC 213 V) did not go as expected due to the clash with Fabio Quartararo that left him out of the race on the first lap of the race and in an absolutely fortuitous incident, so the eight-time world champion will arrive in Motegi wanting to get rid of that “thorn”, but with the objective that he never tires of remembering whenever you can have as a priority to make the maximum possible kilometers on the motorcycle.

In any case, the pilot of the energy company will be one of the benchmarks in Motegiespecially due to the fact that it is on a track owned by Honda and where the good performance and victories of its riders are always seen with great pleasure by those responsible for the brand, although this time it will be the “local” Takaaki Nakagami, after the fall he suffered with Marc Márquez himself as the protagonist on the Teruel track.

If Nakagami is in doubt, who will not be sure is Joan Mir (SUzuki GSX RR), who decided to get off the bike in Alcañiz to give himself more recovery time of his ankle fracture and that, surely, will make him a doubt for the next race, seven days later, in the Thai circuit of Buriram.

To the long list of aspiring to “stand out” in Japan can be added that long string of Ducati pilots who are almost always there, the Australian Jack Miller, the Frenchman Johann Zarco, the Spanish Jorge Martín or the Italians Marco Bezzecchi and Luca Marini, without forgetting the South African Brad Binder, who surprised us with his performance with the KTM RC 16, or his teammate, the Portuguese Miguel Oliveira, who will want to say goodbye to the Austrian manufacturer to join Aprilia in the best possible way.

Maverick Viñales (Aprilia RS-GP) is another of the riders to watch out for Well, his performance in Alcañiz was far from what was seen in recent races due to poor training and the problems in which he was involved in the opening lap of Motorland, which is why the Girona native from Roses surely wants to make up for it with a good performance in Motegi .

Something more or less similar happens to Alex Rins (Suzuki GSX RR), “grey” in the race from Teruel, who finished in ninth position, but who will surely seek to improve on the Japanese circuit, as will his compatriot Alex Márquez (Honda RC 213 V).

Tags: commitment, Japan, faces
Osvaldo Bisbal, historical leader of Argentine boxing, died
José Toledo, leader in the Professional Golf Tour in San Miguel de Allende
This is how the table was left with Talleres as the absolute leader, River on the prowl and Boca that is approaching
MOTOGP 789