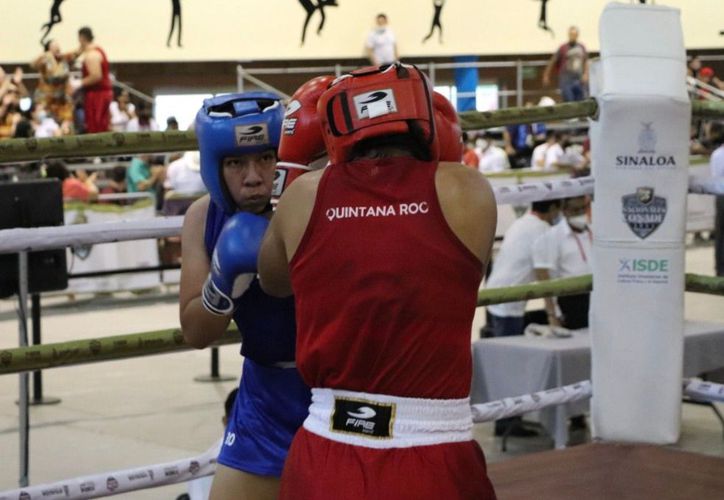 The Quintana Roo delegation won the gold medal in boxing at the Conade 2022 National Games, after Perla Rubí Zamora climbed to the top of the winne

The Quintana Roo delegation won the gold medal in boxing at the Conade 2022 National Games, after Perla Rubí Zamora climbed to the top of the winners’ podium in the women’s section.

In addition, Shomara Alanis receives her bronze medal at the award ceremony, which concludes the activities of the discipline in Culiacán, Sinaloa.

Gold medal for Quintana Roo with the magnificent participation of Perla Rubí Zamora in the boxing discipline of the Conade 2022 National Games, which were held in Culiacán, Sinaloa.

The grand finale between the representative from Quintana Roo, Perla Rubí Zamora, and the contender from the state of Guerrero, Almendra González, took place on the evening of Monday, June 27.

By unanimous decision of the judges, the boxer from Quintana Roo won the victory against the representative from Guerrero, Almendra Gonzálezin the last scheduled fight of this day, which also concluded the activities of the boxing discipline in the country’s highest amateur sports event.

From the María del Rosario Espinoza gym, in Culiacán, Sinaloa, both athletes gave a great performance in the ring, immersing themselves in an incessant exchange of blows that ignited all those present; however, the Caribbean boxer once again demonstrated her power with her fists, with technique and good tactics, which finally led her to win the gold medal.

At the end of the fights, the formal award ceremony was held, in which Perla Rubí Zamora climbed to the top of the podiumfor the gold medal, after his undefeated passage through the 2022 edition of the Conade Nationals.

In this ceremony, Bárbara Shomara Alanis also received her bronze medal, which she obtained during the day on Sunday.

With the obtaining of the gold and bronze medalsthe curtain falls on the Quintana Roo boxing delegation at the Conade 2022 National Games.