Rahm dies on the shore after a tremendous end 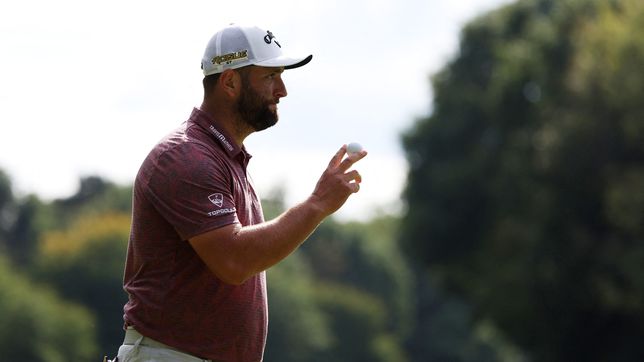 At times the worst nightmares of the PGA and the DP World Tour threatened to come true at Wentworth. LIV men such as Patrick Reed, who became the

At times the worst nightmares of the PGA and the DP World Tour threatened to come true at Wentworth. LIV men such as Patrick Reed, who became the leader at the clubhouse, or Talor Gooch made decisive bets in the last round of the PGA European Championship, cut to 54 holes after the suspension of the second day due to the death of the Queen Isabel II. Reed, who shot a -9, left a -14 as a bar that several players ate up throughout the afternoon. One was Jon Rahm. The other, Shane Lowry, who ended up taking the water with -17 and prevented the LIVers, criticized in the days before the event by several European golf flagships, from scoring another battle in the war for the pinnacle of professional golf. .

After Reed’s move, the first to really rock the board, came a major organ from Rahmbo. The Biscayan, in a splendid trance with the putter (he holed nearly 39 meters in total), went up to 62 shots, ten under par, and left the course of Virginia Water (England) in the lead, but also with several dogs of prey sniffing their trail. Seven birdies and two eagles, -2 for the first nine holes and a majestic -8 (29 strokes) for the nine seconds, in which the only bogey of the day fell, crowned an imperial lap by Jon, who punched several times for a walk and died bitterly on the shore.

He was overtaken with his last impact of the tournament by the Irishman Shane Lowry, who did not fail throughout the track and scored an equally impressive -7. He started the machine with eagle at four and reached the second half, with -4, the winner of the 2019 British Open was already a clear candidate. Two new birdies, at 10 and 12, tied Rahm’s result. The final lunge came on the last hole. He left a little more than five meters for eagle and failed, but the birdie and the title were given. McIlroy also had options, but he couldn’t get a birdie out of 17, he did get a birdie out of 18 in the par-5 double that closed the field, and he gave up.

Cabrera Bello, from the Canary Islands, who started the last lap as the best placed Spaniard, shot -1 to -12, soon out of the final battle. Otaegui from San Sebastian accompanied him at -12 with -2 on the day. Both were in 12th position. Larrazábal and Campillo, -1 to -9 both, in the 52nd.