Rahm gives up all his chances of victory in Scotland 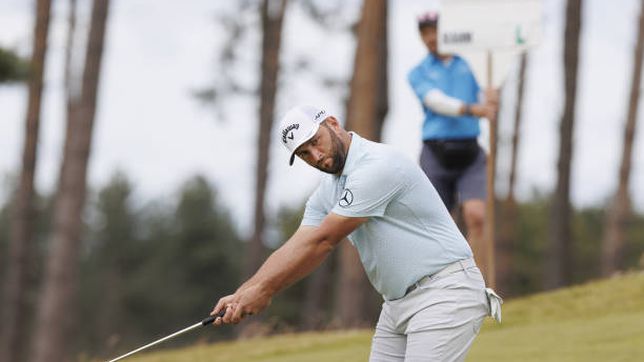 The American Xander Schauffele became the new leader of the Scottish Golf Open, threatened by the good dynamics of the Spanish Rafa Cabrera Bello,

The American Xander Schauffele became the new leader of the Scottish Golf Open, threatened by the good dynamics of the Spanish Rafa Cabrera Bello, second after completing the third and penultimate day, in which the number 3 in the world, Jon Rahm, collapsed

Rahm, who at the Renaissance Club in North Berwick, Scotland, has begun his preparation for next week’s British Open, has suffered a progressive decline in the tournament in the previous two sessions. But this Saturday it sank completely.

The double bogey he signed on the 10th hole was a reflection of the unfortunate day of the Spaniard, who finished eighteen, moreover, with five bogeys. Rahm, who only had three birdies, finished the day with 74 shots, four over par. The classification places him in 53rd place with a total of 214 in three sessions, eleven more than the leader.

Schauffele has gone from less to more during the competition and will face the final day as leader. And that the American, eleventh in the ranking, faltered at the end. The last two holes he completed with bogeys. The only ones he scored on a card with six birdies. In the end, Shcauffele totaled 66 shots, four under par. He was the most regular North American of the session along with Cabrera Bello, who remains in second position as the leader’s main threat and with everything to decide on Sunday.

Cabrera Cabello had 67 hits with an eagle, in number 5, and four birdies that only tarnished the three bogeys he made. The Spanish are two shots away from Shcauffele. The leader during the first two days, the American Cameron Tringale, had a disastrous participation. The North American, who excelled in the opening when he equaled the field record with -9, has declined. He has gone less and this Saturday he fell to sixth place after finishing with +4. Meanwhile, the Americans Ryan Palmer and Jordan Spieth and the British Jordan Smith share the third position, one impact from Cabrera Cabello and three from the leader.

British Open, the last great conquest of golf in the year
Masters of Augusta, the tournament of idols and legends of golf
US Open 2022 | Golf: The best shot of the US Open! This is why Scottie Scheffler is number one in the world
GOLF 1943