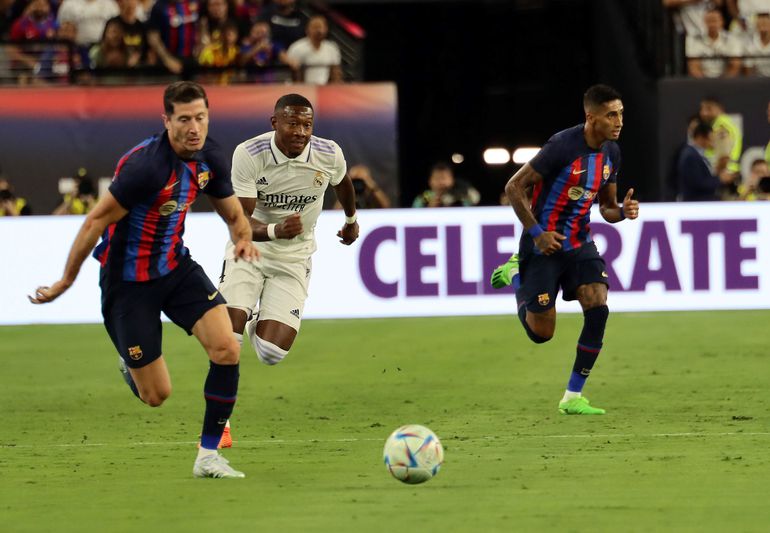 With a spectacular goal from their new Brazilian winger Raphinha, Barcelona beat Real Madrid 1-0 this Saturday in a vibrant friendly in Las Vegas (

With a spectacular goal from their new Brazilian winger Raphinha, Barcelona beat Real Madrid 1-0 this Saturday in a vibrant friendly in Las Vegas (United States) in which several signings such as the Polish Robert Lewandowski made their debut.

Taking advantage of a blatant mistake by Eder Militão, Raphinha scored the winning goal in the 27th minute with a left-footed shot from outside the area directly into Courtois’s top corner. The Spanish classic was played at the luxurious Allegiant Stadium, home of the NFL’s Las Vegas Raiders, before 65,000 spectators.

Lewandowski, Barcelona’s star signing, started from the start and tirelessly searched for the goal during the 45 minutes he played.

With other reinforcements such as Raphinha himself, Christensen and Kessié, in addition to the return of Ansu Fati after injury, Barcelona gave a glimpse of the competitive team that they want to be again next season.

Read more: Ancelotti: “It is clear that when Benzema is not there we are missing something”

“I think the result is short. We have been better than them, generated more chances. We are on the right track”, coach Xavi Hernández congratulated himself.

“Today we have competed against the champion of the League and the Champions (Champions League. Friendly, not much”, stressed Xavi before praising the desired Lewandowski.

“He adapts very well, he is very humble. He has won almost everything in the world of football and has the humility to work hard for the team. For us it is an incredible sign”, he affirmed.

Madrid, who played their first pre-season game, exhibited a great lack of shooting and offensive gunpowder in the absence of their scorer, Karim Benzema.

Both teams will resume their tour of US friendlies on Tuesday; Real Madrid against América de México in San Francisco (22:30) and Barcelona against Juventus de Turín in Dallas (20:30).

Will they buy a Spanish soccer team?
Football is dead, long live oil
Ancelotti has the key to the goal
FOOTBALL 3177