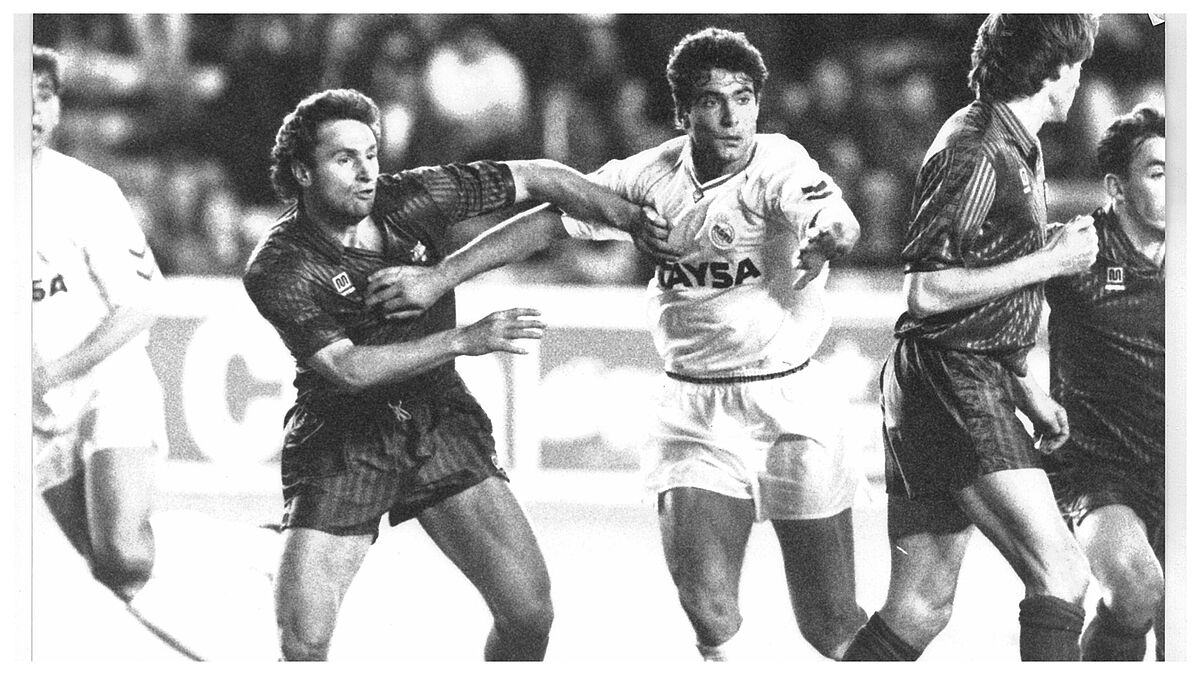 Las Vegas opens fire between the two giants of Spanish football. In the heart of Nevada, Real Madrid and Barcelona is they face in what, after the

Las Vegas opens fire between the two giants of Spanish football. In the heart of Nevada, Real Madrid and Barcelona is they face in what, after the signings of the azulgrana team, is emerging as the great duel of national football for this season, with arguments to also transfer it to the Champions. It is not the first time they have faced each other in the preseason. But there was one in which the two giants served as guinea pigs to test the new rules that FIFA wanted to apply to football to gain rhythm.

On September 11, 1991, with the League already started, Barcelona and Real Madrid They played the second leg of Desafo Canal Plus at the Camp Nou. In May, at the Bernabu, the Whites had won 3-1 with a spectacular Hagi and Cruyff absent due to a UEFA sanction.

The second leg was played with different rules than the first leg. They wanted to rehearse with the two great Spaniards what FIFA had brought to the Under 17 World Cupwho had conquered Ghana by beating Spain a month earlier in Florence. They were two. On the one hand, the offside area was limited to the large area of ​​the goalkeepers. Only in this area, 16.5 meters, could the illegal position exist. With this rule, the majority of the field was free of the infraction and the defenders would have less ground to advance and leave the rival attackers in an offside position. The goal was to achieve a more offensive football. The other was that the goalkeeper could not catch the ball with his hand again when it came from a teammate.

Madrid defended 3-1 in the first leg with a 1-1 (Nadal and Aldana) who gave him the trophy. Only one offside was called during the entire match, the madridista Villarroya.

But all eyes were on the reactions to the proven rules. The conclusion was that this was a disaster for football. “It is proven: it is a good regulation to play handball. Playing with these rules three games a week the players would kill themselves. I have not seen any detail that favors attacking football”, he explained Cruyff. From the other bench Radomir Antic was no less harsh: “I think that with these rules we take away a very important thing in football, which is the rhythm of the game. There were two or three players, in the case of Salinas, who practically played pivots. spaces. Football is strange with these rules; I came with the idea of ​​giving a show and in the end I only saw physical waste on the part of the players”.

From inside the field, the view was not much different. “I don’t think the new rules go with current football. You can’t play in 80 meters. It’s not what coaches currently want. What is clear is that you kill midfielders. Milan you can’t play it with the new rules. This match for the midfielders has been exhausting. They have run a lot and it has been a real stick. The line between defenders and midfielders has been very wide and there have been many free spaces. This is very difficult to reconcile. I am against these new rules. That I would be the most benefited, for being the forward and having much more possibilities to control the slump and mislead the defenses”, he explained buttragueo.

and Julius Salinas He was following the same line, although they are not hard: “The players in the midfield are going to run a lot, like a long-distance athlete. The separation of lines is very large. An entire League cannot be finished with these new rules. As striker, you wiggle less, you’re less visible, but you have more chances to dodge the defender and open more gaps. Maybe it’s a bit boring, the game is static, but you can make great scoring chances”.

The norm of goalkeepers came to stay The offside one was banished because the response of the teams was not to attack, it was to lock themselves closer to their goal. Have passed three decades and they keep thinking about the offside rule.

Loading...
Newer Post
Mike Tyson’s most beastly car
Older Post
“I couldn’t speak”: Mexican boxer, who managed to get out of a coma, tells her story