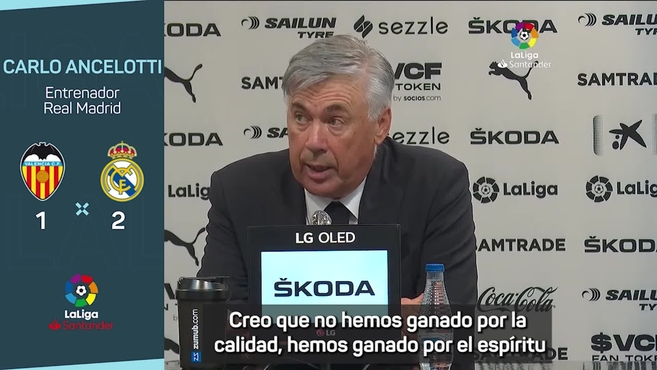 Updated 09/19/2021 - 23:31 Carlo Ancelotti the game ended very satisfied with the attitude and passion of his players. The coach admitted that i

Carlo Ancelotti the game ended very satisfied with the attitude and passion of his players. The coach admitted that it was not the best game of his team, but he highlighted the desire that his players have to add the three points.

“We did not play the first half well, we went well against it, but we were behind … and when you are behind they mark you. The second half we were better, fresher …”

“Valencia is doing very well, it came from a good streak … and we came from the Champions League game and that was noticeable at the beginning”

“They are Real Madrid forwards, we are lucky to have them. But I am satisfied with everyone. Hazard well, Camavinga well … On the contrary, the three forwards have been fantastic and then in the second half, with control of the game, in the area are very dangerous. “

“An annoyance in the twin, we’ll see what happens.”

“He has played very well, he has looked for solutions … He is playing well.”

The influence of Ancelotti with the changes:

“Making the changes is complicated, because I change my mind many times. All those who entered the end have done very well. Isco, Camavinga, Jovic and Rodrygo have changed the dynamics of the game. With the five changes we have an advantage, because we have a lot of quality”.

The faith of Madrid:

“We have not won because of quality, but because of the indomitable spirit of the team. We have continued to the end. We have a fairly young team. I am the first to say that we are not doing spectacular football, that we have to be more aggressive without the ball. .. ”

“Young people have to understand that quality is not enough. You have to put commitment, quality, motivation … Quality

The lack of goal:

“I never thought that the team did not have a goal. The goal is because the players have quality. My job as a coach is to bring together the best and put them together for the team.

Tags: Carlo Ancelotti, Real Madrid, soccer / real-madrid
Carlo Ancelotti does not rule out retiring from football once he leaves Real Madrid
Real Madrid: Ancelotti: “We didn’t lose by putting Camavinga on the left back”
Madrid admires La Liga, settling at the top
FOOTBALL 3250

Loading...
Newer Post
Ligue 1: Messi, changed in 75 ‘… with the face of not understanding anything
Older Post
Max Homa comes back and takes the title at the Fortinet