Real Madrid: Benzema: “I don’t play thinking only of titles or goals, I play because I love football” 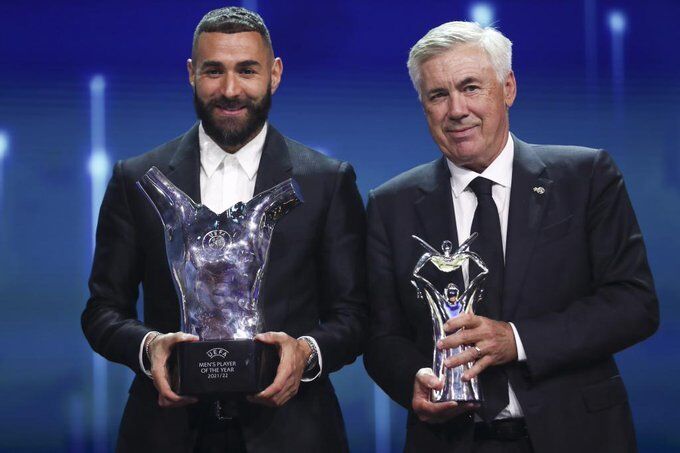 Karim Benzema attended the media from the European Sports Media (ESM) who made up the jury that, together with the 96 coaches from the Champions Le

Karim Benzema attended the media from the European Sports Media (ESM) who made up the jury that, together with the 96 coaches from the Champions League, the Europa League and the Conference, voted him UEFA Player of the Year. He got 523 votes, to 122 from Kevin De Bruyne and 118 from Thibaut Courtois.

“Now at 34 I’m better, I play better. It is true that on a personal level this was the best season of my career, but there is something that has not changed: I enter the field thinking about what I have to do to win the game, I think about the team, not about myself”.

“Although each title has its history and is differentit is evident that this Champions League was the most difficult of the five I have won, and for me it was also the most beautiful because of the comebacks and because we never lowered our arms”.

“Cristiano helped me a lot, with him I had another role and when he left I knew I could take a step forward in scoring goals, but continuing to play football. What has changed since then is my goal tally, but I still play the way I think this game should be played. The figures mean that I am not far from the legends of Real Madrid, and that gives me confidence, although I know that reaching Cristiano’s goals is impossible. That’s why I focus on what I can do on the pitch to help the team win. Numbers are not the most important thing. I don’t play thinking only of titles or goals, I play because I love football, although I have dreams, of course, like winning the World Cup or a Ballon d’Or”.

In Movistar + praised Ancelotti: “He is one of the best coaches in the world that I have ever had. I remember Mourinho and ‘Zizou’, who has done monumental things in Madrid… but Ancelotti left, came back as the last coach on the market and we won the Super Cup , League and ‘Champions’. He is someone who in the breaks of the games gives us a confidence that later we get on the field with the desire to come back, that only he does”.