It says Ancelotti and the test of cotton are the results: Real Madrid is one when it is Carvajal in eleven and another if the Leganense is absent.

It says Ancelotti and the test of cotton are the results: Real Madrid is one when it is Carvajal in eleven and another if the Leganense is absent. So much that since the two starter returned to activity after his last injury, a problem in a calf, Madrid has not lost again. Specifically, in the last 10 games, of which Carva it only rested in one (1-0 at Athletic Club).

The official return was hardly testimonial, in the Classic on October 14 (he played one minute), but from there Carletto gradually but decisively returned to the Spanish international. Almost two uninterrupted months in which Carvajal shows signs of having left behind the ordeal of physical problems (he missed 36 games) that haunted him last season. Now he smiles also thinking about the National Team.

That recovery and that of Mendy have given a much more solid air to the white defense, which appears against Atlético at its best moment of the course, with three consecutive clean sheets. Carvajal himself has been giving the recipe, he wants “forcefulness” in the area. 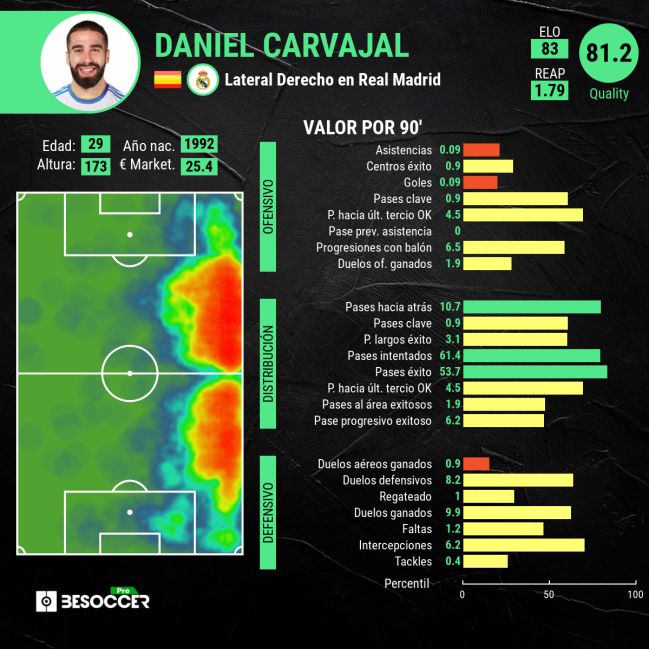 Carvajal’s pulse is not going to shake today. The derbies against Atleti are his specialty, it is the match that he has played the most in his career. Tonight’s number 26 and in the penultimate, that of just a year ago at Di Stéfano, he was closer than ever to scoring his first goal against the rojiblanco rival. In fact, it was a matter of inches. In the 63rd minute he was released with an unexpected right hand from a distance that beat Oblak, but the ball hit the post and in the end it went in, but it was thanks to the rebound hitting the Slovenian’s back. The minutes were given to him by the goalkeeper on his own doorstep. Even so, Carvajal dedicated it to his newborn son. Today he will have another opportunity to give him a goal, this one now entirely his.

This is how the table of positions remained with Talleres as the only leader and Boca in the fight
Mallorca – Seville, live
Arsenal achieves third successive success in English football
FOOTBALL 1116