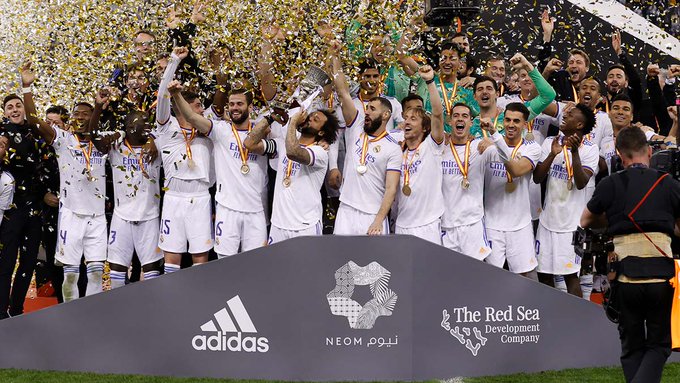 In the final of four in Riyadh, Saudi Arabia, they beat their arch-rivals Barcelona 3-2 in extra time and dominated the game in the crucial due

In the final of four in Riyadh, Saudi Arabia, they beat their arch-rivals Barcelona 3-2 in extra time and dominated the game in the crucial duel for the trophy against the battle-hardened Athletic Bilbao side, who had earlier left in the road to Atlético de Madrid 2-1.

The success of the meringues 2-0, with goals from the inexhaustible Croatian Luka Modric, who at 36 years old seems to revive laurels, and the Frenchman Karim Benzema from a penalty. “I am very happy with the result and I think we are on the way to great things”, celebrated the Italian coach of the winners, Carlo Ancelotti.

Modric took the MVP award of the match, although his partner, the Belgian goalkeeper Thibau Courtois won deserved praise by stopping a penalty from Raúl García with his left foot. “If he scores, we would have had eight or 10 minutes of heart attack,” admitted the lanky goalkeeper.

Thousands of kilometers away, the round of 16 of the Copa del Rey recorded an unfortunate event. Just moments after scoring the equalizer for Betis against Sevilla, an as yet unidentified vandal threw a plastic bar that hit the Sevillian player Joan Jordán in the head.

The match, at the Betis’ Benito Villamarín stadium, was suspended in the 39th minute. It was decided to resume it yesterday, against the wishes of Sevilla’s coach, Julen Lopetegui, and ended with success for Betis, who went through to the quarterfinals in the fair

An issue that will dominate part of the week of football in Spain, where, however, the other issue with spotlights is the clashes on Thursday in the Copa del Rey of three LaLiga giants, Real Madrid, who will face Elche; Barcelona against Athletic Bilbao; and Atlético de Madrid against Real Sociedad.

And then, with little rest, the clubs will return to the arena of the national championship with new commitments this weekend. One of them, by the way, repeated by chance, the meringues, leaders of the fair, with Elche.

Loading...
Newer Post
Doc Rivers: “When I see another good European, I get pissed off”
Older Post
“I lack speed, I can’t find what MotoGP offers me anywhere” – Andrea Iannone