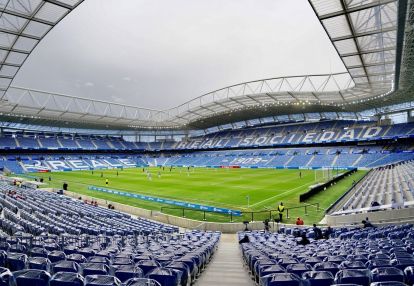 Real Sociedad adds talent from North American sports to its organization chart. The txuri-urdin club has incorporated Markel Guevara as the new head of events. The executive comes to Donosti from Capitanes de Ciudad de México, where he has worked for the last three years as commercial director of the first Mexican franchise of the G-League, the NBA’s development league.

Guevara arrives at Real Sociedad to lead the events management. From this position he will work alongside Erlantz Yeregui, responsible for spaces and events. After the remodeling works of the municipal stadium, the San Sebastian club aspires to take advantage of the venue with the possibility of hosting various events such as concerts and shows, fairs or congresses.

Graduated in strategic management at the University of Deusto, Guevara began his career as a market analyst at Deneb Medical, and worked for companies such as IAC Group or Ulma Handling Systems. In 2018 he made the leap to North America as international trade advisor at the Spanish Embassy in Mexico City.

After this experience, he became part of the Mexican franchise of Capitanes de Ciudad de México in which he has been in charge of the sales strategy and management of ticketing, sponsorship and merchandising, among other aspects, between 2019 and 2022. The franchise He has just achieved a place in the G-League, the development league of the NBAthe first with totally Hispanic capital to compete in the United States.

At the beginning of the year, the San Sebastian club secured the operation of the renowned Reale Arena until 2074 by reaching an agreement with Anoeta Kiroldegia, the public company that owns the venue. In addition to the reform that has already been carried out in the stadium, in which the club invested more than 60 million eurosthe Royal Society presented a year ago an infrastructure plan with which to promote internal growth through Zubieta, its sports city.

The txuri-urdin entity has around 92 million euros from LaLiga Impulso, according to estimates made by 2Playbook Intelligence. Of the total funds, you can use up to 70% for this estate plan and the development of new businesses.

The San Sebastian club estimates the direct impact of the Covid on its ordinary business at 12.8 million euros, in which, only for subscribers and members, it stopped entering 9 million. For the 2021-2022 season, it budgeted 136 million and a surplus of 2.45 million.

The Gipuzkoan entity suffered a drop in revenue of 7% in 2020-2021, to 108.69 million euros. Without the Covid, this item should have increased to 125.53 million. Real’s forecast was to have won 8.22 million euros without a pandemic in between.

The club closed the first half of the 2021-2022 season with losses of 7.3 million euros, as reflected in its interim financial statements. Despite this, La Real has increased its business boosted by its presence in Europe, raising its turnover by 37% in the first half, to 59.3 million euros.

Income grew, and so did expenses. They did so at a lower rate, 29%. The increase in salaries and wages of the sports staff stands out, which reached 42 million euros, 35% more year-on-year. Meanwhile, amortizations for the signing of players increased by 9%, to 9.1 million euros in the first half. For the whole of 2021-2022, the forecast is that these two items consume 75.6 million and 17 million euros, respectively.

Loading...
Newer Post
Demi Lovato in Chile: when is the concert, prices and how to buy tickets
Older Post
How a winning Ferrari sinks in the World Cup