Redemption of the New York Giants 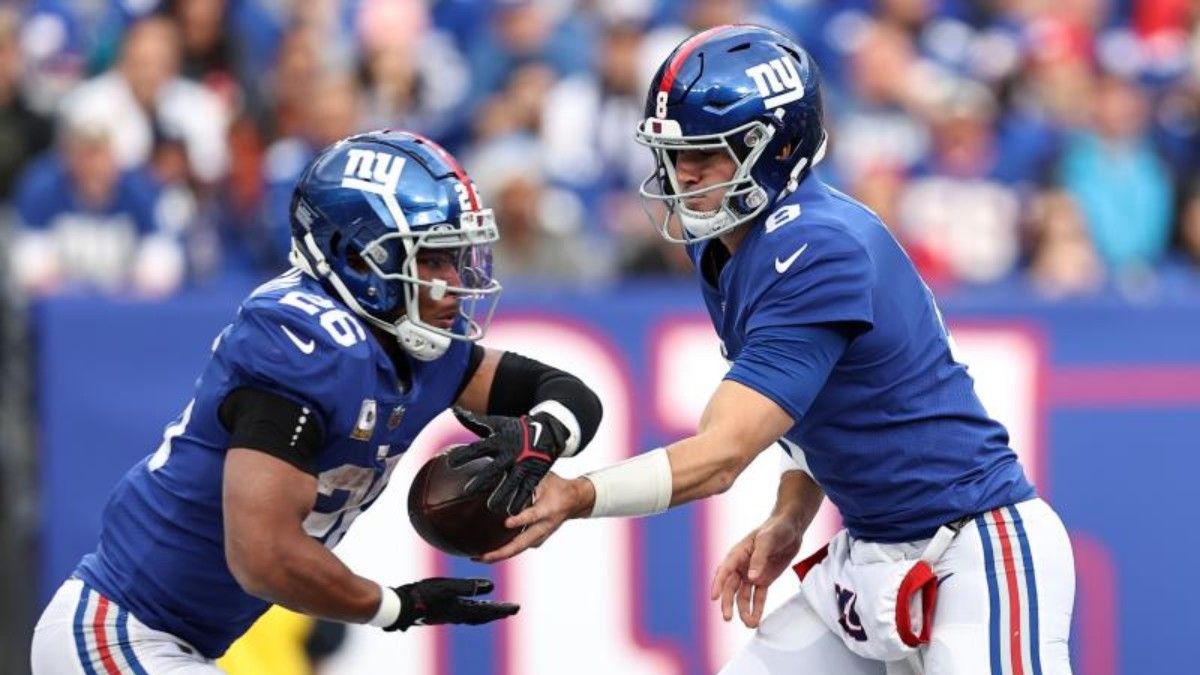 Redemption of the New York Giants


The New York team has already won seven victories this season and occupies third place in the NFC, a conference led by the Eagles and Vikings

Brian Daboll, head coach of the Giants, has managed to turn the team into one of the most creative and hard-working offenses in the league.

The new york giants They are, without a doubt, the revelation team of this season in the NFL along with the Seattle Seahawks. The victory last Sunday against the texans by 26 to 16 has confirmed best franchise start since 2008and they already have seven victories in nine days.

Those from the big apple have converted under the orders of their coach, brian dabollin one of the most attractive teams in the league, with a wide range of resources in attack plays and a Saquon Barkley star in the running back position.

Since the achievement of super bowl in 2011 commanded by Eli Manning in the quarterback position, the giants they became one of the most losing franchises in the league, rarely exceeding six regular-season wins.

In the last five seasons, the image of a lost team without a long-term plan has been the tonic for fans used to seeing their team in playoff positions in the first decade of the century.

To everyone’s surprise, the giants They are having a brilliant season 22/23. Seven victories and only two defeats endorse the work of a renewed technical staff that seems to have hit the right buttons on its two best players: Daniel Jones and Saquon Barkley.

DANIEL JONES IS REBORN FROM HIS ASHES

The one who was chosen in sixth overall in the 2019 draft Since landing in New York, he has experienced a roller coaster of emotions.

After a promising first season, in which he pitched for 24 touchdowns and more of 3000 yards like rookiesJones accused the lack of an offensive coordinator who knew how to get the best of him and drastically lowered his benefits, for which he became one of the most erratic quarterbacks in the pass, throwing 29 interceptions in its first three seasons.

This campaign, under the label of ‘system’ quarterback, a connotation that refers to the most predictable QB in the league and without too many resources, Daniel Jones is rising from his own ashes, silencing the most skeptical and critical of his figure.

Great fault of this transformation is Mike Kafkaoffensive coordinator of the team, who has been able to get the best out of his quarterback without exposing him excessively on the field.

Jones is a quarterback Accurate in the middle of the field but not a great deep pitchera facet that in his first seasons caused him to be intercepted repeatedly.

Kafka has devised a plan of attack based on the race, with the intention to protect his quarterback and not expose his arm excessively.

thanks to a stellar Saquon Barkleystar running back and Jones’ primary partner on offense, Daniel combines running and passing plays with whom you can carry on drives sustained without the need to look for the deep zone, where the rival secondary prepares to intercept the ball aware of the lack of precision of the enemy.

Another reason for Jones’ success has been the major contribution of his offensive line and receivers, who are a quarterback’s main allies on the turf.

in facet of playmakers, Darius Slayton is being the favorite receiver for his QB, and adds two touchdowns and 327 yards.

For its part, the offensive line commanded by Andrew Thomas and Evan NeaHe, pick number seven in the last draft, is giving the team time to create their plays, especially in run situations, where the Giants running backs are finding good gaps where to attack the rival defensive line.

Daniel Jones Adds 1596 passing yards this seasonand its improvement in the execution of plays, especially in the second readingstogether with an excellent footwork that was already intuited in his university days, They already place him in the top 10 quarterbacks in offensive efficiencya list containing names like Mahomes, Josh Allen or Joe Burrow.

If the Giants’ season is being a success, it’s thanks in large part to their starting running back, Saquon Barkley, that he is now proving why he was chosen in the second position of the 2018 draft.

Barkley has been the victim of injuries in his first four NFL seasons, which is why he can’t prove himself on the field.

Now, with no physical problems involved, Saquon is showing because he is one of the best players in the leaguewith a power in the first unstoppable step for the rival defenses.

Giants running back He already has 931 rushing yards and six touchdown scoresand is undoubtedly the best candidate for comeback player of the year in the NFL, an award given to the revelation player of the season.

Saquon Barkley is proving to be unstoppable in run situations even with heavily loaded opposing boxes, where the defense accumulates many players near the opposing offensive line to prevent a run play.

The 26 of the Giants not only has a very powerful lower body, but also It is also capable of being another pass option for his quarterback, who trusts his running back’s hands as much as he trusts his wide receivers.

The renewed Giants have already become one of the most attractive teams to watch for NFL fans, with a fast and innovative game that is a headache for defenses, used to playing against a flat New York team without big plays on offense.

Those of Brian Daboll occupy the third place of a national conference packed with talent, led by the Philadelphia Eagles and the Minnesota Vikingsteams that have only lost one game so far this season.

Even with eight games to play, the Giants’ playoff spot is practically insured and it will be, without a doubt, one of the most difficult teams to beat in the post-season for the rest of the franchises.

Tags: Eagles, nfl, daniel jones
‘They play football very well, they are intense’
Brady and Buccaneers beat Eagles and advance ‘walking’ to the Divisional Round
Eagles dominated Vikings and is leader of the East of the National
NFL 629