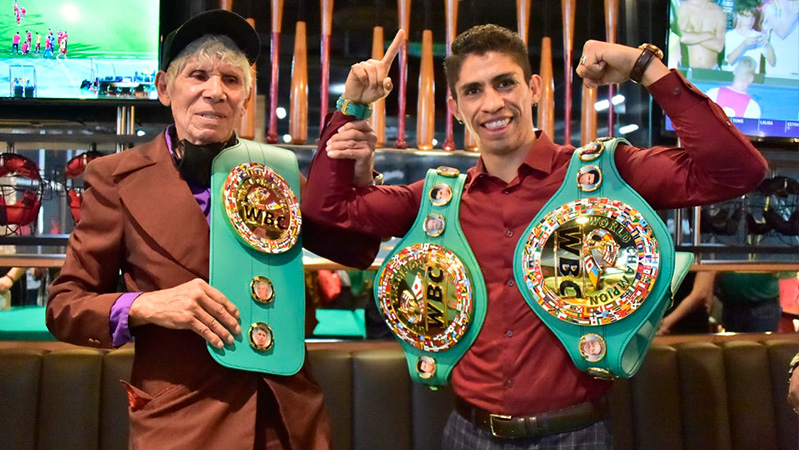 After receiving his green and gold belt from World Boxing Council President Mauricio Sulaiman, new WBC Featherweight Champion Rey Vargas says that when the chips are in order, he wants to fight Leo Santa Cruz.

Feeling four pounds more comfortable as a champion in a second category, after reigning as WBC Super Bantamweight and now after defeating Mark Magsayo for the Featherweight belt, Rey said “It is going to be a spectacular and a fight between two Mexicans that the fans want a lot. Leo is a champion fighter with very solid fights and big hits. My undefeated record also speaks for itself, so it will be a war between two great champions… and pride for Mexicans.”

He further added: “Leo is a strong and courageous fighter who throws a high volume of punches and likes to fight forward and is technically sound. He’s quite tall, he likes to throw long range punches and I think it’s going to be a fascinating fight. I feel stronger at Featherweight. Every gram of weight is important, as even a hundred grams can be a significant factor in a boxing match. The strategic plan for my extra weight and the diet to achieve it was a little different. It worked out well, I was at the right weight a week before the fight.”

Rey’s trainer, the legendary Nacho Beristain, still lean and cunning at 83, said this last fight had been difficult and demanding, with various trains of thought intervening, but fortunately it had turned out well.

He explained that Mark taking Rey to the mat reduced the points advantage, but Rey was still up a point and won the final round to wrap up a highly competitive fight. Nacho said that there could be a rematch and if this happens, it will be an easier victory for his disciple.

As for Rey fighting Leo Santa Cruz, Nacho says that it would obviously be difficult, but Leo is a bit worn out as he has fought many wars, so Rey has an excellent chance of winning. He says that although Rey is not a heavy puncher, he is a very accomplished boxer with a difficult style for opponents and that he manages an effective liver punch.

Tags: boxing, He says, Nacho
Floyd Mayweather and the bond that unites him to Mexico; he has a mexican grandfather
Boxer’s Day was celebrated in pure solidarity
Canelo Alvarez ‘has enough experience’ to beat Bivol in rematch, Shawn Porter mentions
BOXING 3636