Ribovics from Salta and his dream of reaching the UFC 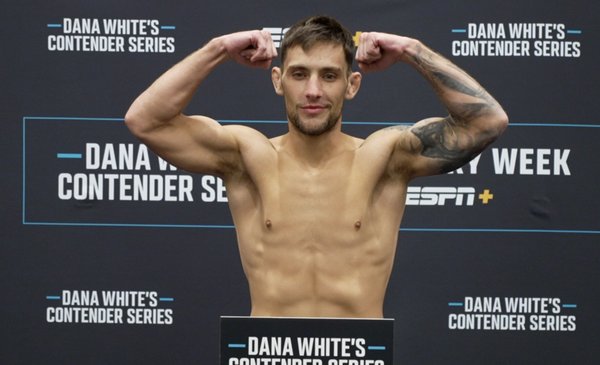 August 16, 2022 – 02:21
The Tartagalense will fight today, in Las Vegas, against Thomas Paull with the illusion of signing with the MMA company. The evening will start at 21 by Star Plus.

For some time now, among the fighters of the local scene of mixed martial arts (MMA), the 26-year-old Esteban Ribovics, from Tartagal, won everyone’s attention, and is pointed out as one of the promises of that sport. Now, the Gringo, as he is nicknamed, has a chance to confirm that he is destined for a career in the UFC.
The man from Salta will fight tonight against the Englishman Thomas Paull, in a fight in the lightweight category on the reality show Dana White’s Contender Series. This is a TV program organized by Dana White, CEO of the company, where if he manages to make a good presentation at the Apex in Las Vegas, a contract for several fights awaits him.
A true undefeated “machine”, Ribovics is 10-0, with all his fights won before the judges’ decision (five submissions and five knockouts). And his record is not an ornament, it helped him get this chance in the program that works as a hotbed for the UFC.
Two months ago he left the Alfa Team in Córdoba for Sanford MMA, in Miami, Florida. “Several people helped me, including family, friends and sponsors. Everyone contributed a little so that I can accomplish this”, Ribovics said about how the trip and stay were banked.
His colleague Emiliano Sordi, winner of the belt and the million dollars in PFL in 2020, with whom he currently lives and whom he knew from Córdoba, helped him get that chance. He told his manager, the well-known Ali Abdelaziz, about Gringo.
The undefeated fighter won in just 27 seconds, with one hell of a right hand. He will now prove himself in the UFC.
“He saw my last two fights and he liked it. He supported me, told me if he wanted me to represent him and got me the opportunity. He told me if he wanted to enter the Contender and I said yes. Also all for my record, if you don’t have a good record they won’t call you. Dana White has to like the prospects”, explained the Salta native.
Ribovics’ last fight was won in February of this year against Franco Aranda at Samurai Fight House, with a 27-second knockout. And the previous one was in December 2020 in just 7 seconds, to obtain the FFC (Fusion Fighting Championship) title in Peru.
Although this is still a good thing, and the forcefulness is celebrated, it could also mean that he reaches a momentous clash with very little cage time in recent years.
Finally, Ribovics analyzed the “pressure” he will have for today’s fight: “I have a couple of friends who support me, family and my own coach (Rubén Fini). He is the person who helps me the most with my head, the ontological part. But afterwards, I try to see it as just another fight. Whether in Buenos Aires, Peru or here, I always try to feel the same pressure, beyond the fact that now my contract is at stake. The fact of being there has already changed my life, but if I win the contract it would change much more. I’m going to go out the same way, to tear the other’s head off.”

Tags: sleep, ribovics, MMA
The brutal KO of a 160-pound MMA fighter in a slapping contest
Venezuelan loses piece of forehead
sacrifice, power and hunger of an undefeated
UFC/MMA 1200