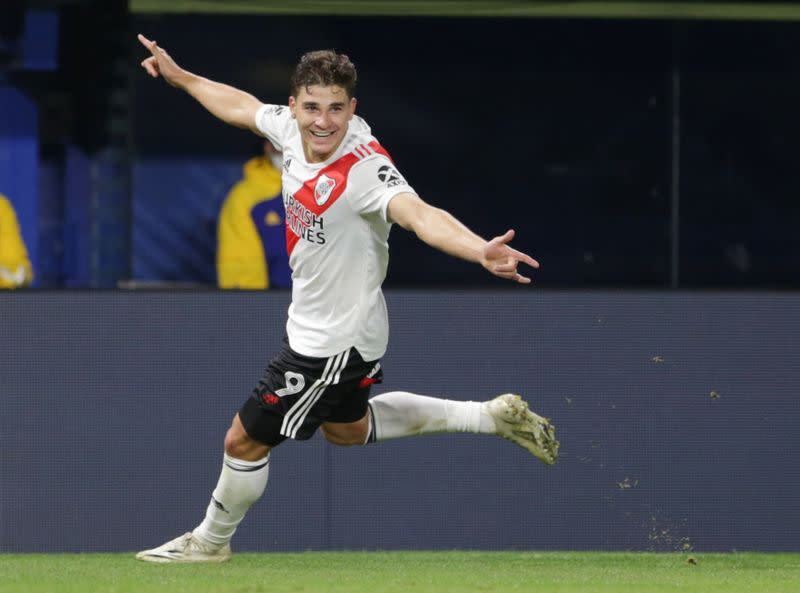 BUENOS AIRES, Oct 25 (Reuters) - River Plate triumphed 3-0 at home against Argentinos Juniors on Monday and took advantage of the equality of its g

BUENOS AIRES, Oct 25 (Reuters) – River Plate triumphed 3-0 at home against Argentinos Juniors on Monday and took advantage of the equality of its guard to establish itself as the comfortable leader of the Argentine Professional Football League (LPF).

With goals from Bruno Zuculini at 27 minutes, from the youth and promise Julián Álvarez at 57 and two minutes later Braian Romero, the “millionaire” team justified the victory and extended the difference to nine with Talleres de Córdoba, which equaled 3- 3 away with Lanús.

River, which achieved its eighth consecutive victory, leads the standings with 42 units, followed by Talleres with 33 points and Vélez Sarsfield along with Lanús third with 31 points.

The professional championship of the South American country has seven dates left to finish and crown the champion, the only goal that Marcelo Gallardo has lacked as a successful River Plate manager for seven and a half years.

On the 18th date, previously this Monday Sarmiento beat Newell’s 2-1 in Junín, Aldosivi from Mar del Plata beat Arsenal with the same result, while Atlético de Tucumán and Patronato finished 2-2.

In the round started two days ago, the defeat of Boca Juniors on Sunday in its passage through Vélez Sarsfield 2-0 stood out. The date was completed later in Avellaneda, with the confrontation between Independiente and Unión de Santa Fe.

Johan Mojica is the name that sounds when talking about Spanish football
Rayo – Espanyol, live
Antonio Valencia disagrees with Gustavo Alfaro for his approach to Venezuela | Football | sports
FOOTBALL 741