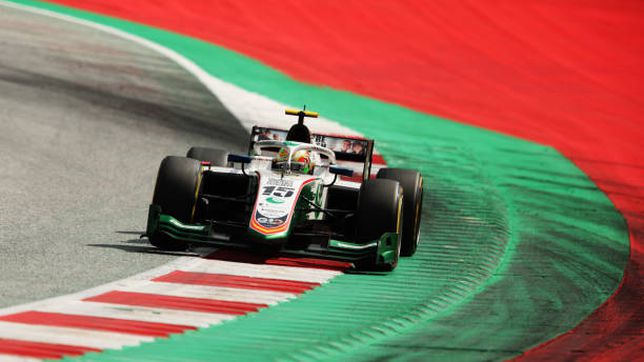 He had not gotten into a Formula 2 since 2018 and replaced Ralph Boschung, with a back injury, in one of the two Campos Racing team cars. The asph

He had not gotten into a Formula 2 since 2018 and replaced Ralph Boschung, with a back injury, in one of the two Campos Racing team cars. The asphalt was ambiguous and Roberto Merhi was one of the few who decided to go out on dry tires at the Red Bull Ring. He started from the bottom of the grid and was fighting for the podium within a few laps. He overtook more than half a dozen of the drivers who compete every few weeks in this championship on the tarmac; by strategy to many others, and he crossed the finish line in second position after a memorable performance behind the Dutchman Verschoor. But the ‘track limits’ got stuck in the direction of the race and the Spaniard received a five-second penalty that sent him to fifth place. He didn’t know that he had been flagged before, nor did he find out about the final penalty until he crossed the finish line.

The funny thing is that later Verschoor, winner, was disqualified because his car lacked fuel. And they applied a 20-second penalty to Daruvala, second classified, for altering the state of the asphalt in his grid position. In that scenario, Merhi would have won the race had it not been for the penalty. Finally the winner was Logan Sargeant ahead of Enzo Fittipaldi and Roberto, who achieved a podium (he could not celebrate it at the ceremony) in his star appearance as a Formula 2 driver (he had just raced with GT in Japan).

The performance of Merhi (Castellón, 31 years old) was memorable in the Formula 1 access championship, plagued by budding stars who in many cases are, in reality, paid drivers; and on a playing field that has little balance: the big teams, everyone knows who they are, always go faster than the medium and small ones. That gives more credit to the podium for Merhi, who was an F1 driver in 2015, with Marussia, and also highlights the general level of F2. Campos Racing appealed the stewards’ decision that left Merhi without a podium. “I dedicate this race to Adrián”, underlined the pilot, who has already been confirmed that he will also participate in the competition weekend at Paul Ricard (July 22-24).

‘It shouldn’t happen’: An F1 champion revealed Valtteri Bottas’ true goal
Formula 1 aerodynamics at the service of the cyclist
NFL, Formula 1, NBA, PSG and UFC already use them
FORMULA 1 2047

Loading...
Newer Post
The shocking image of the Cuban boxer Rigondeaux after a burn on his face
Older Post
Stove football, high and low players for the 2022 Apertura