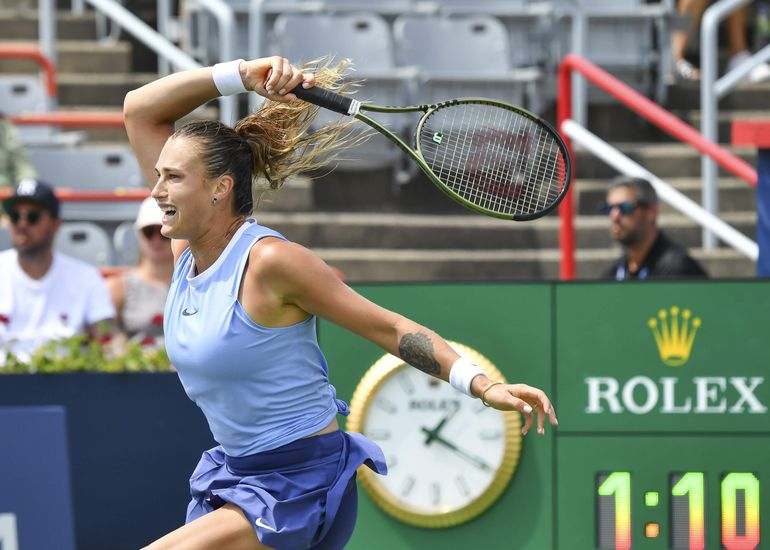 MONTREAL. Belarusian tennis player Aryna Sabalenka beat her compatriot Victoria Azarenka on Friday and advanced to the semis of the Montreal WTA 1

MONTREAL. Belarusian tennis player Aryna Sabalenka beat her compatriot Victoria Azarenka on Friday and advanced to the semis of the Montreal WTA 1000 tournament, where on the day the Spanish Sara Sorribes was eliminated.

Sabalenka, 23, won the battle of Belarus, defeating her compatriot Victoria Azarenka and getting a ticket to the semifinals. Sabalenka, the first seed, won in straight sets 6-2, 6-4, thus denying his countryman the opportunity to return to the ‘Top 10’.

The first-seeded quarter-final triumph took him 82 minutes, during which he hit seven aces on serve. Sabalenka has won three of his four matches against his compatriot, including the previous one in October 2020 in Ostrava.

The top seed played her eighth quarter-final of this 2021, placing her at the top of that category along with world number one, Australian Ashleigh Barty, who is absent from the Canadian tournament. For her part, Azarenka had reached the semifinals of the Canadian tournament in 2010 and 2011. Sabalenka will face the Czech Karolina Pliskova, seeded fourth, in the semifinals. Pliskova got her ticket thanks to an easy victory over the Spanish Sorribes, who could not before the push of the Czech.

Sorribes succumbed in straight sets of 6-4, 6-0 in one hour and 22 minutes. For her part, although she is no stranger to playing prolonged matches, Sorribes was coming off a lengthy three-set match against Katerina Siniakova. The Spanish was trying to reach the seventh semifinal of her career, and the third on hard court.

Sorribes also lost the possibility of having achieved her third triumph over a ‘Top 10’ and the second this year, since she defeated the Australian Ashleigh Barty, world number one in Tokyo.

– Results for Friday at the Montreal WTA 1000 tournament:

5 records Novak Djokovic has in his tennis career
Tennis: Paula Ormaechea and a tough defeat in Romania
Tsitsipas asks for coaching: “Tennis needs it”
TENNIS 23

Loading...
Newer Post
England | The beauty of football in this scene: 2012, Messi and the future of Chelsea ahead
Older Post
Exporters offer details of their annual golf event in a cocktail