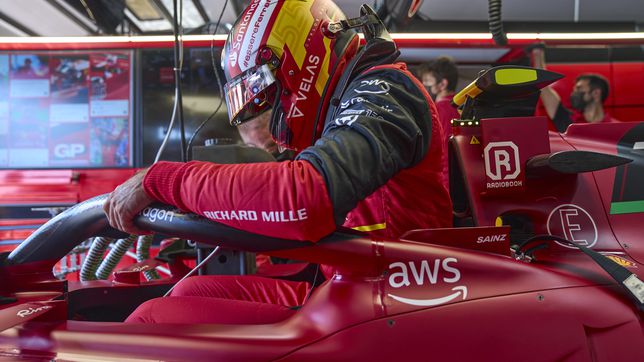 Carlos Sainz is in his eighth season in Formula 1 since he made the leap to the World Championship at the age of 19 back in 2015 with the Toro Rosso team. Sainz is fifth in the current drivers’ standings this season with 156 points, 102 points behind World Championship leader Max Verstappen. One victory, six podiums, one pole, two fastest laps and three retirements (all for reasons beyond the driver’s control) are his arguments this season. Sainz suffered in the adaptation to the F1-75 with the new ground effect regulations in the first races, above all, the retirements in Australia and Azerbaijan soon took him away from a hypothetical fight for the title.

Montreal was the turning point for Sainz. He brushed the pole and sealed an interesting second place fighting with Verstappen until the last few laps. Canada was the push to later take pole position and win at Silverstone, the first of his career. In the last five races prior to the break, Sainz has won all the confidence of Ferrari. In them, he has added 73 points, almost the same as in the previous eight races (until the Canadian GP he only had 83 points). The driver from Madrid must aim to be a great points collector for Ferrari to at least overtake Russell and Pérez in qualifying. Later, he will fight with Verstappen and Leclerc. As the championship flows, we will see what role Sainz receives from the wall.

In the last three seasons, Sainz has signed his best and solid results in the second phase of the championship. In 2019, he finished sixth in the Drivers’ Championship, best of the rest in his first season with McLaren. His first podium finish at the Brazilian GP will remain in his memory after several hours of waiting for a penalty against Hamilton. In the last ten races, he added the same points as in the first eleven, 48 points. In his second year with McLaren he again finished sixth in the drivers’ standings, but his points helped McLaren finish fourth in the constructors’ championship. Of the 17 races, in the last eight he added 64 points for the 41 he tied in the first nine tests. The great second part of the championship pleased him at Ferrari and served as a great support for his signing in 2021.

Already at Ferrari, Carlos Sainz made a fabulous debut with the Maranello team last season. The man from Madrid finished the year in fifth position, being the first driver after Mercedes and Red Bull. Sainz collected 83 points in the first 11 races and 81.5 in the next ten. His consistency is his greatest asset and last year he showed it. He only had two dropouts. Since the eighth round, the Styrian GP, ​​he has always added while his great rivals, Leclerc or Norris, had ups and downs during the year.

Now Sainz has scored 156 points in the first 13 grand prix, he has tamed the Ferrari and his best version is expected since this weekend in Spa after the summer holidays. The second parts are his thing.

Michael Schumacher receives an award in Germany
Where does full Red Bull come from?
What is needed for the Formula 1 project in Barranquilla to become a reality?
FORMULA 1 2437