Santi Aldama comes out in the Summer League 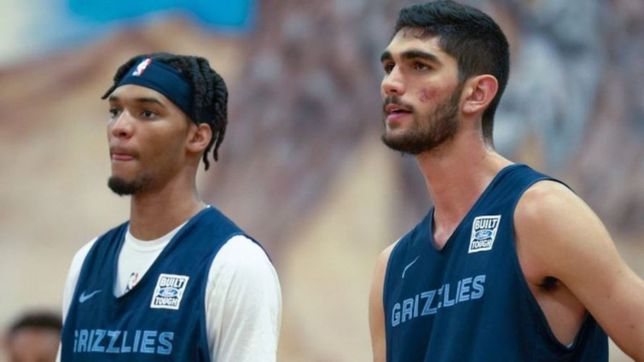 The Spanish Santi Aldama, 21, was the star of the night in the meeting between the Memphis Grizzlies and the Minnesota Timberwolves of the traditio

The Spanish Santi Aldama, 21, was the star of the night in the meeting between the Memphis Grizzlies and the Minnesota Timberwolves of the traditional Summer League. The summer tournament organized by the NBA invites young players who want to gain a foothold in the league to have good performances. The canary, who was already in the Memphis franchise last season, signed a spectacular match.

With 22 points, Aldama was the top scorer for his team, followed by Tremont Waters (16). The young islander felt comfortable from the start, being accurate near the basket and moving smartly off the ball. He was the maximum reference of a team that has left good feelings in its passage through the Summer League tournament with players like Kenneth Lofton Jr, who will surely win a contract in the coming days, David Roddy, Jake LaRavia and Kennedy Chandler, selected in the last Draft.

His formative time in Europe and his great intelligence allow him to be a complete player, different on the court. At 22 points you have to add 8 rebounds, 6 steals and 2 blocks, signing one of the highest quality individual statistics in the entire Summer League. After spending a season with the Memphis Hustle, a team in the Grizzlies’ development league, Aldama wants to find a place in the rotation of Taylor Jenkins, coach of the Tennessee team, and demonstrate his ability to influence the track.

Loading...
Newer Post
Tyson Fury could have stayed in a wheelchair if he kept fighting
Older Post
F1 to take action over homophobic and racist comments at Spielberg