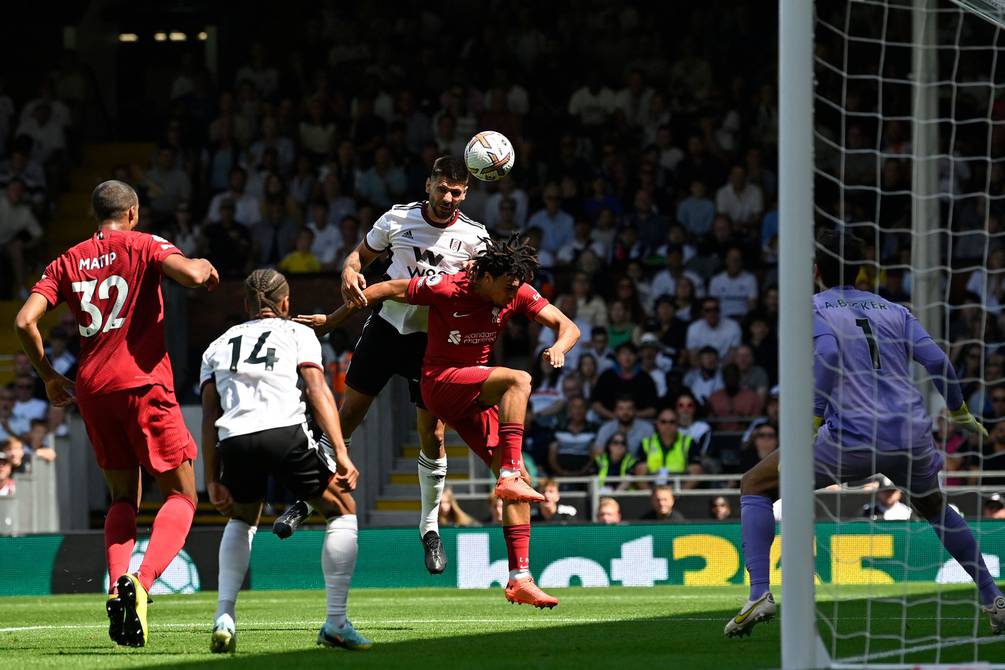 Total dynamics, speed, pressure (pressure until touching the opponent so as not to give him a single centimeter of freedom of movement), marking an

Total dynamics, speed, pressure (pressure until touching the opponent so as not to give him a single centimeter of freedom of movement), marking and game aggressiveness, strong tackles, physical power, back and forth, attack after attack, grained fire, athletic performance at the stress limit. A science fiction football that reminded us of Rollerball, that movie with the recently deceased James Caan in the leading role. Rolleball was a postmodern, fictitious and violent sport, fierce, dehumanized, with players equipped with armor moving on roller skates and trying to get a steel ball into a small hole that is the opponent’s goal. In that need they collide, they hit each other very hard and they are cruel. Caan, the unforgettable Sonny Corleone from The Godfather, perfectly embodied the role.

Uuuuffff… what a Premier start…! The promoted Fulham received Liverpool in his famous lair of Craven Cottage, on the edge of the Thames, released “barely” 128 years ago, in 1896, that is, recently. And he gave a harsh welcome to the English Cup champion. Accustomed to harassing their rivals, harassing them to take the ball from them first and attack them later, Klopp’s Liverpool, the most finished example of modern football, was overwhelmed from the start by Fulham, which made him feel truly uncomfortable, badly. What Klopp or Klopp…! Fulham stood with an intimidating attitude in each locked, in each clash. And a frenetic, ultra-physical game came out, almost science fiction like in Rollerball. And others played well, good things were seen, this is what is remarkable: with such a high degree of opposition, the current soccer player still manages to create, set up a game, draw geometric combinations at a touch, create goal situations. And goals.

It was 2-2 but there was enough danger to make it 3-3, 4-3. The two could win, although the feeling always floated that Fulham barked louder. Above all, every time that fantastic 9 came into action, the Serbian Aleksandar Mitrovic, who never sounds in the transfer market, but who would also be a star in any other team. Mitrovic achieved two memorable feats last year. In Championship (second division) he scored 43 goals in 44 games. The promotion is almost yours. And in the last game of the Qualifiers he scored the historic goal against Portugal in Lisbon. With a tie, Portugal went to the World Cup. Serbia fell against the Portuguese, but equalized and in the 90th minute Mitrovic scored a deadly header for 2-1 that gave him direct qualification to Qatar 2022. Yesterday he scored two against the very steep Liverpool, the first, with a magnificent jump, nodding on the very head of Alexander Arnold, and nailed it up. The second, a penalty, that Van Dijk committed to himself. Nobody doubts it, there will be a statue for Mitrovic at Craven Cottage in the near future.

Only in the 64th minute were the Reds able to match. And it was because of the entry of Darwin Núñez, who is called to be a great. The Uruguayan entered at 51 ‘and quickly showed his teeth. He equalized with a taquito, but he was also the one who turned the tables on Fulham. There will be plenty of talk about him. Then he lowered the ball for the goal that closed the curtain, in charge of the Egyptian Salah. Side note: beyond a nice overflow with a shot to the post, it was another performance not outstanding by Luis Díaz, and Darwin Núñez is on the bench. Look, Lucho…! They even gave the peasant to sell; first a very rigorous entry from Tete and then another from Kebano, elbow included.

The result, however, is anecdotal. What was impressive was the total intensity level of the game, especially the first half. In the second the fury subsided because, of course, the actors are human beings. We are going more and more towards that energetic, hyperdynamic football. And in that direction all the others go. That’s how it is today. Liverpool has a squad valued at 870 million euros, Fulham’s at 193. On the pitch there were no differences because there are still three aspects that are not related to the budget: attitude, preparation and tactics. Taken to a plane of excellence, that trinity can match many other adversary virtues. A fourth could be added: mysticism. If a leader or a squad manages to create it for their own benefit, everyone will perform twice as well. In that, Fulham were equal to or better than Liverpool.

Claudio Vivas, an Argentine coach, recounts that when he showed Marcelo Bielsa for the first time a video of a youth named Lionel Messi, then seventeen years old, Bielsa told him “put the video on normal speed.” He thought it was too fast. “It’s normal,” Vivas replied. If we show this Fulham-Liverpool to a footballer from the ’50s, ’60s or ’70s, he may ask the same thing as Bielsa: “slow it down”. That is why it is much more difficult to stand out today. Any crack from the past would have had a hard time doing the same as Mitrovic yesterday. Because of the very high level of obstacle. Speed ​​alone would more frequently lead him into error. Not counting the pressure and mobility of the rival.

We watch a lot of football, several games a week, from Europe and South America. The trend is there. On Wednesday we appreciate Vélez 3 – Talleres 2, also volcanic. Argentine soccer, shrunk by the economy, emptied of figures that emigrate everywhere, continues to be of a captivating intensity. They are all Fulham. They run, fight and lock nonstop, move like enzymes and also try to play. And everyone wants to win. Patronato thrashed Boca 3 to 0 and River fell in the Monumental with 70,000 supporters against Sarmiento. Everyone wins. Palmeiras conquered the last Libertadores losing only one game: against Defense and Justice, in São Paulo, 4 to 3. With nothing, they seek to win. It is the prevailing mentality.

On Friday we watched the sensational start of the Bundesliga on TV: Eintracht Frankfurt, brand new champion of the Europa League, received Bayern Munich in its packed Waldstadion and the unruly visitor made it six. Six to one…! Müller and Beckenbauer’s club has tyrannized German football based on excellence and superiority. On Wednesday, Frankfurt will play the European Super Cup against Real Madrid and Bayern have already crushed their illusion. There we also saw, in addition to goals and good football, an electrifying duel, with remarkable mobility. The twenty-two actors moved for 96 minutes like the Duracell bunny, never stopping, with striking liveliness. Everyone goes to that, otherwise they can’t compete. (D)

the transfer market does not stop
Manchester United seeks promotion in English football
ATHLETIC 3- BETIS 2 | Marcelino: “Until today football had been very unfair to us”
FOOTBALL 3181

Loading...
Newer Post
Venezuela hours away from having a new World Boxing Champion | Other Sports 123
Older Post
The MotoGP riders who have won the British GP the most times