Science joins the debate on possession and gives its keys 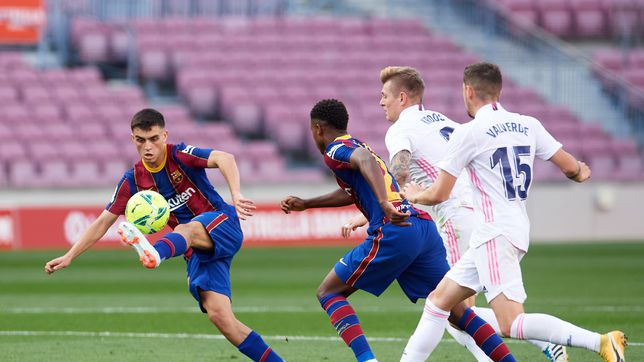 Possession is a recurring debate in Spanish football. Pedri has been one of the last to shake it ("Some clubs are satisfied winning, no matter wha

Possession is a recurring debate in Spanish football. Pedri has been one of the last to shake it (“Some clubs are satisfied winning, no matter what. Barcelona wants to win, but playing with the ball, creating chances… I like this football better”) and science has also signed up to him to contribute his grain of area. Recently, in May, a study has been published that sheds more light on this subject: the relationship between possession and the speed of the game. It is an investigation from which several insights can be extracted: like playing defense is more tiring than playing attack or the key to equalizing possession against teams like Barcelona and Real Madrid.

The study called ‘How does possession of the ball affect the physical demand in the Spanish LaLiga? A multilevel approach’ shows how possession influences the physical demands of teams. Roberto López de Campo, coordinator of the Mediacoach Project and the LaLiga sports research area, and Fabio Nevado, Mediacoach analyst, have participated in this investigation. Both are two doctors in Sciences of Physical Activity and Sport. This scientific paper has a sample of 1,520 games played during four consecutive seasons (from 2015-16 to 18-19) and in which 80 different teams were involved. They divide teams into three categories (high, medium and low possession clubs) based on ball control and present them in different scenarios based on pace of play. In this work several conclusions are observed, one of them is that teams with high levels of possession cover shorter distances at low intensity, which leads to less fatigue, the opposite happening with those with low possession, which are the ones that cover the most distance at a low pace of play.

The tendencies between possession and distance are accentuated as the speed of the game changes. That is, the less possession they have, the more they run. “When you turn up the intensity (to 15-21km/h), it’s quite significant that teams that have a high level of possession experience more variation. It is an interval related to quality displacements in tipping situations”, explain Roberto and Fabio. And this has a reason: “The teams with high possession are also powerful at a budget level to sign good footballers is with very good conditions. It’s clear that when they really have to defend they have much more capacity to grow compared to when they don’t have the ball than when they do have it”. And they add: “These teams suffer more when they don’t have the ball because they have to move much more”. The research suggests this curious fact and that it could be useful to rival coaches when planning matches against clubs with a different style of play: when teams are below their possession levels, they cover greater distances at high intensity. This can serve for teams, a priori, weaker can stand up to Real Madrid and Barcelona. How can you tire them and make them suffer? Stealing the ball from them and making them run at high intensity. Where they will have to assume game distances that they are not used to.

Both doctors explain the positive and negative versions of teams with high possession going further when they don’t have the ball: “When they are faced with game situations with less control and that they are not used to, they have to run much more and are capable to cover much more distance between 15-21km/h. But is it good for a team with possession to run more than usual when they don’t? Well, maybe not, because it might happen because they’re out of place. The normal thing is that if you are a team with high possession, you feel comfortable when you have it”.

One of the curiosities of this study is in the sharing of the teams with little possession when they face the maximum intensity (sprint) since their tendency totally changes. In the rest of the situations, it is true that these low-possession teams flatten their behavior the greater the possession, the less distance covered. For example, at a pace of play between 15-21km/h, regardless of possession, they usually cover the same distance. But the anecdote is in the sprints that break the trend: the more possession they have, the more they run. Roberto and Fabio point out that this situation could have an explanation: “The teams with low possession are teams that play direct and counterattack, when they are down on the scoreboard they have more possession because they make more plays, they are not necessarily more elaborate or longer. . For example, it is rare for a Mendilibar team to make 30-pass plays, but they can increase their possession because they have a lot of short possessions. They have that need to reach the rival box and create more chances but with their vertical style”. What can explain why they completely break the trend of greater possession less distance covered. Because in this case, these teams that play on the counterattack would be forced to create more chances to score. The ones that lead them to travel more distance to greater possession.

One of the curiosities that the study provides, providing more literature to football scholars and that is another step to discover new trends. “There is some data that surprises you and that is not commonly accepted. With this type of research we look for data that contributes to the day to day of the technical bodies”, affirm the doctors. Now teams have a new tool to find the antidote to neutralize their opponents through possession and physical exertion.