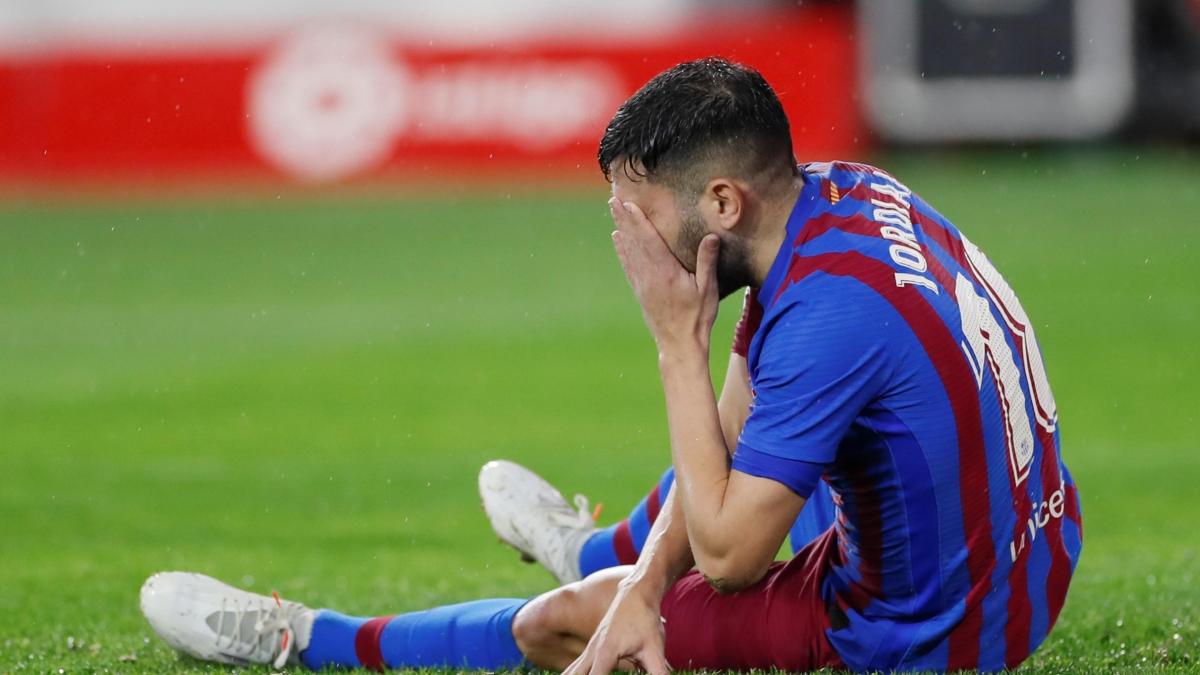 The azulgranas forgive a Sevilla in inferiority and leave two points in the Pizjuán.

Powerful but focused shot from Jorid Alba caught by the Moroccan goalkeeper.

Powerful shot from the French winger from the apex of the area that hits the post of the goal defended by Bounou.

Good center from Abde and Gavi, coming from behind with everything in favor, he finishes off. Sevilla is saved.

The Barcelona players ask for a corner, but Del Cerro Grande does not grant.

Del Cerro Grande does not show a card again, which angers Piqué a lot.

Sevilla had a throw-in in favor, Jordi Alba and Koundé went for the ball and, at that moment, the French defender had the cables crossed and he threw the ball violently in the face of the Barça side .

Good transition from Barcelona that ends with a deflected shot from the winger from the top of the area.

Good cross from Rakitic and Delaney shot wide from the penalty spot.

Each corner action is a dangerous action for Sevilla.

No changes on both teams.

Of the 7 goals conceded by Barcelona in the ‘Xavi era’, 5 have been from set pieces (via LaTDT).

Ronald Araujo ties the game by finishing off a corner cross!

Del Cerro Grande does not show a yellow card.

On the other hand, a blow for the Catalans who see themselves losing after a good 30 minutes.

Great goal from ‘Papu’ Gómez who takes advantage of a great rehearsed play.

Del Cerro Grande’s assistant has been clear at all times and has raised the flag moments after the ball kissed the net.

Julen Lopetegui is disappointed in the band.

Barça’s corner that Eric Garcia finishes off in the first instance and, neither Araujo first, nor Jutglà second are capable of hitting a goal from the heart of the area.

The Catalan forward is being able to turn easily when he receives on the attack front.

The Pizjuán grass is very fast because of the rain.

On replay it didn’t seem like it at all. Despite this, Bounou had managed to catch the ball.

Ferran Jutglà with his head after a lateral foul sends a deflected header … The shot position was quite frank.

Despite protests from Barcelona, ​​Del Cerro Grande does not show any cards.

We will see how the playing field holds up.

The clash can be seen live through the Movistar La Liga channel, which corresponds to the Movistar + platform.

The Nervión team will not be able to count on Suso, Jesús Navas, Lamela and Óliver Torres due to injury.

In addition, Acuña and Montiel are doubtful.

Good afternoon! Welcome to live coverage of the duel between Sevilla and Barcelona, ​​corresponding to matchday 4 of LaLiga Santander.

After beating Elche in a good game at the Camp Nou, Barcelona are looking to take advantage of their visit to Nervión to climb positions in the standings, in a postponed match on the fourth day of the domestic competition.

Loading...
Newer Post
Which golf clubs Charlie Woods plays and why they are the envy of other golfers
Older Post
For rent as a human punching bag