Shawn Marion: “The Matrix”, the livelihood of Nowitzki’s ring 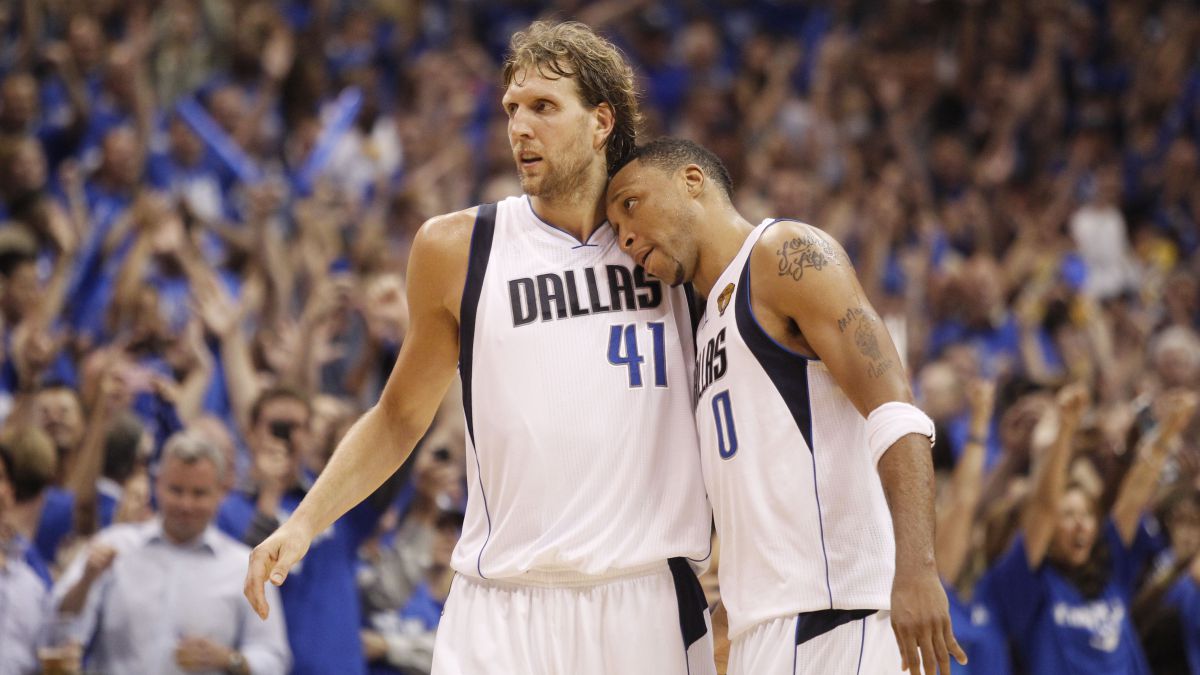 Without reaching the nomenclature of legend, Shawn Marion was always a guy very cool. Because of the type of game he played, his explosiveness, h

Shawn Marion: “The Matrix”, the livelihood of Nowitzki’s ring

Without reaching the nomenclature of legend, Shawn Marion was always a guy very cool. Because of the type of game he played, his explosiveness, his ability to be decisive on both sides of the court and his humility in never hogging that close-up that he never occupied. Nor did he pretend: second and third sword in the Suns, he was a role player since he left the Arizona franchise and thus won the 2011 ring, from the hand of a huge Dirk Nowitzki and a veteran and spectacular squad in equal parts . And he retired after playing a new Finals, in 2015, already advanced in years and without much contribution by a physical diminished during a season in which he was more of a luxury veteran than an excessively important piece. And that is where Marion developed most of her career: in the shadows, without being the focus of the spotlight, without aspiring to be the protagonist and always looking, in attack and defense, the best for her team.

Marion is not, as much as he tries himself (he said it very recently), one of the 75 best players in the history of the NBA. In that list there have been some casualties and others that have not been, but perhaps they should have been. But nobody has spoken, and with good reason, of a Marion that is behind all that conglomerate of stars. And without there being so much difference, the difference is clear; He was never a franchise player or statistical leader. Neither champion of the ring being the reference of the team that won it. And all that weighs heavily on a very large but, at the same time, selective list, and which is also accessed by a huge amount of talent that Marion never got to. And this is striking and shows that it is extremely difficult to access that top that the NBA has invented for its 75th birthday. And it is that Marion had much talent. Which teaches us all that those who are ahead of him had.

Born in Waukegan, Illinois, on May 7, 1978, Marion attended Vincennes University (Indiana) from the Clarksville Institute. In 1996-97, as a freshman, he played 36 games and averaged 23.3 points and 12.8 rebounds., in addition to shooting with 56% in field shots. His 838 total points as a freshman established him as the second-highest total for a season in the history of the University. In his sophomore year and in the same games he went to 23.5 points and 13.1 rebounds with 60% shooting. In total, he averaged 23.4 points in those two seasons (1,685 total). and left as the second highest scorer in Vincennes history.

He changed Indiana for the more prestigious UNLV. He played with them in 1998-99, averaging 18.7 points, 9.3 rebounds, 2.5 steals and 1.9 blocks in 29 games. After a great university stage, he declared himself eligible for the draft that same year. Before, of course, he had his doubts: in March of that year he assured that his intention was to graduate in his fourth year and thus try to storm the NCAA championship. However, many scouts took notice of him, and Marion confirmed that if he did go to the draft, he would not be chosen below the middle of the first round. A fact that, surely, strengthened his desire to make the great leap to the NBA and leave the University. On June 30, 1999 the draft was held in Waashington, United States. And the Suns selected Marion in ninth position in the draft: a new adventure was beginning.

Upon landing in the NBA, Marion was nicknamed “The Matrix“by the analyst of TNT and former basketball player Kenny Smith. It was during the preseason of his rookie year and he took that nomenclature due to his imposing physique. Aside from that, Marion’s early years contrasted with Danny Ainge’s later years as a coach (yes, the one who then has been a manager for so long at the Celtics) and the passage of Scott Skiles and Frank Jackson on a bench that seemed gaffed. The franchise tried to take steps in the right direction since Charles Barkley will leave Arizona with the 1993 Finals and the MVP of that season as the tops of his great resume. And they tried to find a lost essence in an NBA that does not wait for anyone. As Marion would discover shortly after.

The forward, who could also play power forward, advanced in the middle of the clandestinity of the entity. He would average 10.2 points and 6.5 rebounds in his rookie year; After this, he never went below 17 in his years in Phoenix, in which he always moved around 10 rebounds. In 2002-03 he went to more than 21 points with 9.5 rebounds on average, which earned him his first All Star. And he continued to be a reef with the arrival of Steve Nash in 2004, when he became one of the best players on a team that changed basketball. With the Seven Seconds or Less, Marion was a favorite of Mike D’Antoni, and accompanied Nash and Amar’e Stoudemire in the era of pick and roll, with 62, 54 and 61 victories in three consecutive seasons in which the Suns consistently opted for the ring but made it very clear that they were a reliable team in regular season, but lacking plan B and specific solutions at specific times when the playoffs came.

Marion became essential in the scheme of a revolutionary team. And there he demonstrated his best qualities: his departure to the counterattack, his ability to post if necessary, an athletic body with which to run from one side of the track to the other, excellent rebounder and very dangerous near the rim. With absolutely archaic shooting mechanics, he was around 39% in triples from 2001 to 2003. And it also worked on the other side of the court, that defense with which he perfected the game of some Suns that were never characterized, precisely, for receiving few points. Yes indeed, the playoffs never ended well: two consecutive conference finals (in 2005 and 2006, 4-1 and 4-2 against Spurs and Mavericks) and a semifinal in which they fell 4-2, again against Spurs and in one of the most controversial series of the 21st century.

Marion’s best statistical year those years was in 2005-06, with Stoudemire’s injury through. The forward assumed more prominence in attack and got 21.8 points and 11.8 rebounds on average, spectacular figures. That year he added up to 60 double-doubles and in the conference semifinals, against the Clippers, he achieved 25.6 + 12.6 in seven disputed games. A year earlier, in 2005, he had 38 points and 16 rebounds against the Mavs, in the sixth and final round of the Western semifinals. Brilliant moments in a project that was a real rebellion and that fell in love with the world, but that could not get the prize of the ring, the one that Steve Nash always resisted and that Marion would find in a different place. In 2007 he played his last All Star and in 2008 he transferred to the Heat along with Marcus Banks in exchange for a Shaquille O’Neal heavily weighed down by injuries. One of the decisions Steve Kerr made in his only time on the board, which took place in Arizona.

Marion went through Miami and Toronto before joining the Mavericks. Interestingly, there he would become Dirk Nowitzki’s squire after being Nash for the Suns. Both, German and Canadian, shared a team in Dallas and are great friends. And it is still ironic that what he did not achieve with the point guard, he did with the power forward, a true legend who is also one of the best players of all time. Marion fitted into a veteran group, with a fantastic coach and a squad that had a number of pieces, all of them fundamental, to win the ring. Marion never returned to the statistics she displayed in Phoenix or to an All StarBut he became essential in Carlisle’s scheme: important in assistant Terry Stotts’s attack, essential in Dwayne Casey’s defense.

Jason Kidd, DeShawn Stephenson, Jason Terry, Tyson Chandler, JJ Barea … The team was older, yes. But this was a great opportunity. And they knew it: a talk by Kidd and Nowitzki with Carlisle after Caron Butler’s injury, a fundamental piece until his fall, caused Carlisle to relegate Terry to the bench and use him as the leader of the second unit (he was already Best Sixth Man in 2009), promoting Stephenson to the start. The Mavs won on defense and beat the Blazers in the first round (4-2), they passed over some champions that they were not again, the Kobe Lakers (4-0) and brought down some young and inexperienced Thunder (4-1) they made it a long way that year and the Finals the next before never seeing the ring so closely again.

In the Finals, the Mavericks defeated the Heat, with the revenge of 2006 and with an identical result but with a different winner: 4-2. Tachycardia matches, a supreme Nowitzki and a lot of equality with a missing LeBron James and a Dwayne Wade who couldn’t do it all alone. Marion, who had scored 25 points in the fifth and final game of the Western Finals and had already given up the triple almost entirely, helped the defense excessively over LeBron. and averaged 13.7 points and 6.3 rebounds, scoring 20 points in the second round, in which the Texans comeback was forged. That’s where the Finals and Marion’s career changed, who at the top of her resume will always have the award that resisted her in the Suns.

In his later years, Marion continued to be tied to the Mavs project, but Rick Carlisle’s team was never eligible for the ring again. The once star remained useful, a good team player who lacked the explosiveness of yesteryear but still played a lot and avoided injury: 63 (of 66, in lockout), 67 and 76 games in his last three seasons with the Mavs, before heading to the LeBron Cavaliers, the first image of the project after the return of the King to the promised land. With hardly any prominence, he played 57 games and his second and last Finals, in which he did not even take to the court. That is the story of Shawn Marion, a player who is not part of the NBA’s top 75 and who is not accompanied by the legend nomenclature. But he has a meteoric career, some enviable numbers and a cool and explosive game that starred in numerous higlights and generated a lot of applause. Oh, and a champion ring. Clear.

Loading...
Newer Post
The quarry of Levante, among the ten most profitable in Spanish football
Older Post
The biggest droughts without valid titles in international football