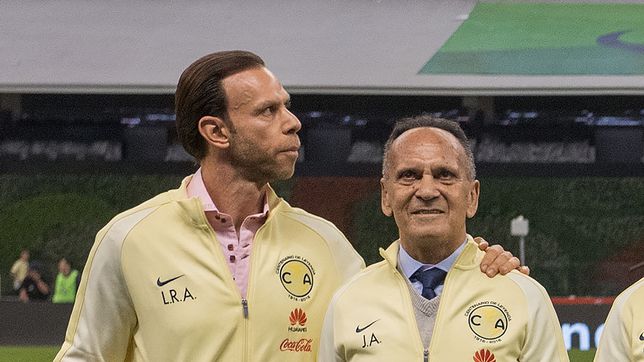 Reaching professional soccer is the dream of many children, but few manage to reach the goal of professionalism. Some soccer players get to play i

Reaching professional soccer is the dream of many children, but few manage to reach the goal of professionalism. Some soccer players get to play in the team of their loves, while others follow in the footsteps of their parents and come to defend the same colors but with a difference of years.

Marco Antonio Fabián began his career in the Reboceros de la Piedad, later he wore the jerseys of León, Puebla, Correcaminos and Chivas Tijuana. On the other hand, his son, Marco Fabián, was luckier and started in the professional world with Chivas, he was also selected for Mexico and won the gold medal in London 2012.

Brazilian by birth and began his career at the historic Corinthians and also went through the ranks of Santos. Years later he arrived in Mexico to wear the shirt of the Águilas del América where he made history by being the top scorer. The azulcrema gene was transmitted to Luis Roberto Alves ‘Zague’ and with the azulcrema team he made history, as he surpassed his father and is currently the soccer player who has the most goals in the nest.

The Dos Santos brothers are among the most recognized today, after their good performances with the Mexican National Team. Like ‘Zague’, the two brothers followed in their father’s footsteps and were able to defend the Águilas del América shirt.

The ‘Chaco’ began his professional career in Argentina with the emblematic Boca Juniors, but later came to Mexican soccer where he made history with Pachuca and Cruz Azul. During his stay in Mexico, the former player of the Machine had Santiago Giménez, who is already a starter with the Machine.

As the history of the Hernández Balcazar in the world of soccer there are few, because the grandfather played for Chivas and was also present at the 1954 World Cup in Switzerland. On the other hand, Javier Hernández Gutiérrez passed through Puebla, Tecos, Atlas and Monarcas Morelia He also went to the 1986 World Cup in Mexico, while ‘Chicharito’ became the top scorer for the Mexican National Team and also played elite soccer with Manchester United and Real Madrid.

The oldest of the Arce had a great career in national football, as he won two league championships, one with Santos and another with Xolos. On the other hand, his son has not found regularity in the first division and since he debuted in the maximum circuit he has passed through Tijuana, Dorados de Sinaloa and Necaxa.

The so-called ‘Maestro’ was one of the best players of his time, since he had a privileged touch and thanks to that he was able to wear the shirts of Tampico Madero, Chivas, Santos, Cruz Azul and Pachuca. However, his son has not had the same luck and after making his debut in Chivas he went to Pachuca and currently plays in Cancún FC.

The ‘Penta’ is considered by many to be the best player in the history of Mexico, since he was a scorer for Real Madrid and Atlético de Madrid, he also had a regular step with the Mexican National Team. On the other hand, the son of the legend did not have the same luck despite having started his career in the Pumas and unfortunately he died at the age of 30 in Mexico City.

The Norwegian had an ephemeral step in his country, since very quickly he emigrated to England to play in the Premier League; already on the island he played for Nottingham Forest, Leeds United and Manchester City. Now in the summer of 2022, his son, Erling Haaland surprised and left the ranks of Borussia Dortmund and became a new Sky Blues player.

The historic Brazilian had a successful time in professional soccer, as he won the 2002 Korea-Japan World Cup, a Copa América and a Confederations Cup. On the other hand, his son named Rivaldinho has not had the same luck, since he has participations in Europe but not in the main leagues.

Loading...
Newer Post
They should punish the boxer who tried to bite his rival
Older Post
Puerto Rican boxer Carlos Ortiz, member of the Hall of Fame, dies