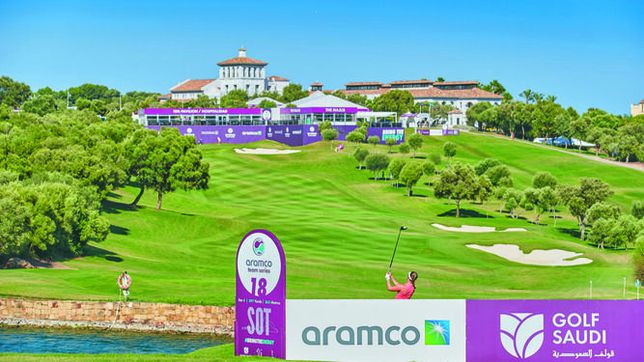 The La Reserva Club golf course is from today the scene of the Aramco Team Series tournament, which brings together many of the best golfers in the

The La Reserva Club golf course is from today the scene of the Aramco Team Series tournament, which brings together many of the best golfers in the world. The innovative tournament, which combines individual and team play, is also part of the Ladies European Tour (LET). This will be the third stage of the Aramco Team Series (five in the year) after those already held in Bangkok and London.

The prize is 1 million dollars, divided into two pots of 500,000 dollars, one for the team tournament (Thursday and Friday) and another for the individual tournament (Saturday) only for professional players.

Between today and tomorrow, Friday, 36 teams made up of three professional players and an amateur invited by the organization, who in this case can be a man or a woman, will compete for the $500,000 prize. On Saturday, the professionals will play the individual tournament with the same equipment.

Notable among the players are the Korda sisters, Nelly and Jessica, daughters of former tennis player Petr Korda, and Anna Nordqvist, winner of three majors. Nelly is number 3 in the world ranking and Jessica, 14. The Spanish representation is headed by Carlota Ciganda, number 39 in the world, Nuria Iturrioz and Ana Peláez.

Ciganda, 32, is one of the team captains: “I am very happy to be here. It is a great place and a magnificent golf course. It is a very important week for me when I play in Spain. The tournament is wonderful, it’s fun to play as a team”.

Aramco’s investment as title sponsor of the tournament, along with Golf Saudi, has made Saudi Arabia one of the largest sponsors of women’s golf in Europe.