Spain was superior to pure football 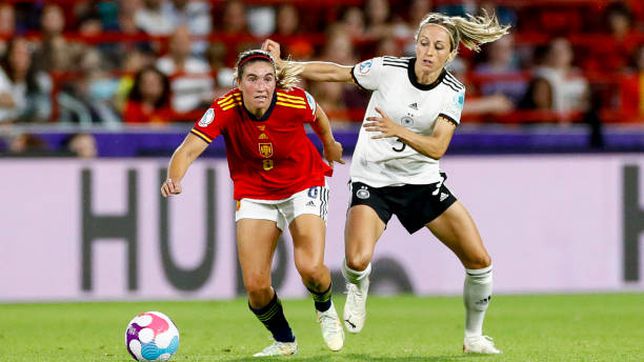 It was surely the most watched match in Spain in the history of women's football. Ours deserved so much expectation. The harsh absences of Jenni

It was surely the most watched match in Spain in the history of women’s football. Ours deserved so much expectation. The harsh absences of Jenni Hermoso and Alexia Putellas (as if you suddenly took Modric and Benzema from Madrid) has shown us even more solidarity with Jorge Vilda’s team. I already know that the Germans knocked us down with a result that admits few plot replies. But in pure football, we were superior to the Germans. I do not get carried away by my national pride that comes from my soul every time I see our athletes defend our shield. But you have to say it loud and clear. Spain plays football well, combines judiciously, is solid behind the two central defenders (Irene Paredes and Mapi León) and generates chances up front that should have a happy ending.

That is our problem: the definition. It is true that Sandra Paños’s bad afternoon in the charming Brentford stadium penalized us seriously (gift to Bühl at 1-0 and poor placement at 2-0), but beyond the individual errors we caused panic in the German defense with Lucía’s one-on-one and Mariona’s two magnificent shots. If Sandra had had another performance and those occasions had had a different outcome, we would talk about something else. On Saturday, to beat Denmark and the quarterfinals.

Cristiano Ronaldo explodes against criticism: “I will shut their mouths” | Sports | Soccer
Orbelin Pineda to AEK; 5 Mexican players who played in Greece
Memorable football afternoon that leaves everything as it was
FOOTBALL 3179