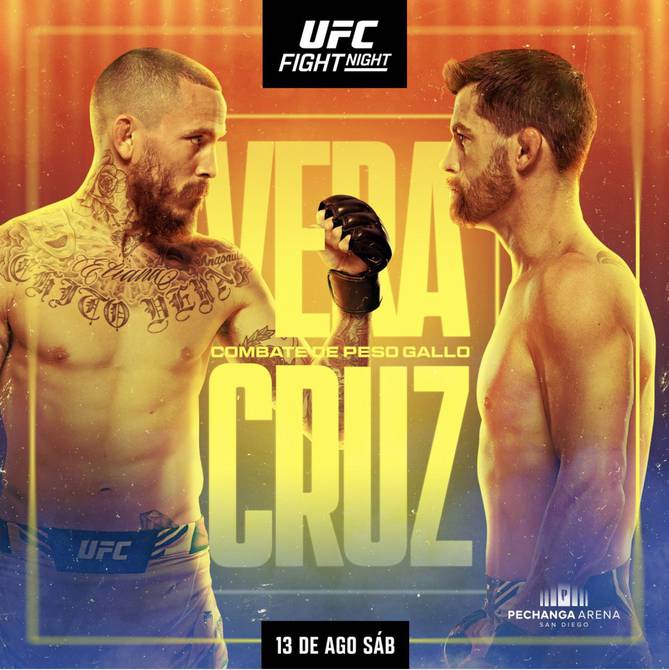 Ecuadorian Marlon Chito Vera has been asking since 2021 for the opportunity to face former bantamweight champion Dominick Cruz. That moment has co

Ecuadorian Marlon Chito Vera has been asking since 2021 for the opportunity to face former bantamweight champion Dominick Cruz. That moment has come, as this Saturday, August 13, he will risk his rise in the 135-pound ranking when he faces The Dominator in the main event of UFC San Diego, in the cage installed at Pechanga Arena.

David Onama against Nate Landwehr in the co-main event, as well as Yazmín Jauregui and Iasmin Lucindo in the minimum weight, promise to leave the octagon warm so that Vera and Cruz can do their thing.

“I want to be (UFC bantamweight) world champion, so I’m going to win this fight, I’m going to finish Cruz… I’m getting to the point of the road to the title. But first things first: finish off Cruz, beat him up, show my level and take the belt to Ecuador one day,” the Chone fighter said defiantly at the UFC Español microphone.

Sean O’Malley thinks Dan Hooker deserves to be more popular in MMA
UFC: The umpteenth ‘it’ of Conor McGregor: arrested for reckless driving with his 200,000 euro Bentley
A massive fight breaks out when an MMA fighter takes on two men while a boxer cheers him on
UFC/MMA 1212