Stephen Curry gets rid of the thorn with the Finals MVP 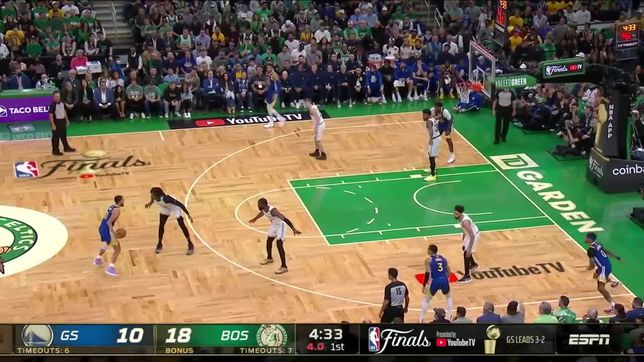 The Warriors have been proclaimed champions for the fourth time in the last eight. The most powerful common denominator is Stephen Curry, who in a

The Warriors have been proclaimed champions for the fourth time in the last eight. The most powerful common denominator is Stephen Curry, who in addition to being the leader who has put the team back on top has taken it out on him who was one of the few blots in his career so far. The generational base, son of Dell and brother of Seth, has raised, in addition to the collective trophy, the Bill Russell that is awarded to the MVP of the NBA Finals.

The eleven votes of those in charge of deciding it have been for Steph. Unanimously, another supreme category individual award arrives.

Curry succeeds Giannis Antetokounmpo, winner last year with the Bucks. In the other three Rings that he had achieved with the Warriors, these recognitions went to Kevin Durant in 2017 and 2018 and to the groundbreaking Andre Iguodala in the first ones they played, those of 2015, also against the Cavaliers. This time, on a stage as iconic as the Garden, he gives another push to his cause as one of the best.

The only weak game that was seen was the fifth, which was a key victory for the Californians, and they went to 16 points. He has completed three matches over thirty and one over forty to stand at 31.1 points on average. To this we must add 6 rebounds and 5 assists between the six appointments. The numbers in the triple are open-mouthed: 31/61, a success of 50.8%. He has surpassed what he had done both in the regular season (25.5 on average) and in the rest of the playoffs (27.1 on average), going up in line with the team and collapsing the door of the NBA a year more.

Curry had settled, with his triple record and the titles won with a Warriors that have changed the style of basketball, in the elite. But in the recurring debates about the position he occupies among the best players in NBA history, he was always mentioned, to undermine his merits, not having a Finals MVP named after him. Far are the six of Michael Jordan or the four of LeBron James, who lead the table, but he is a sanbenito that can no longer be placed on him.

Captains will play the NBA G League in the United States
Which players have gone to the Jr NBA Camp from the Spanish clubs?
James Harden, intimate enemy – Sport-Journal
NBA 2834