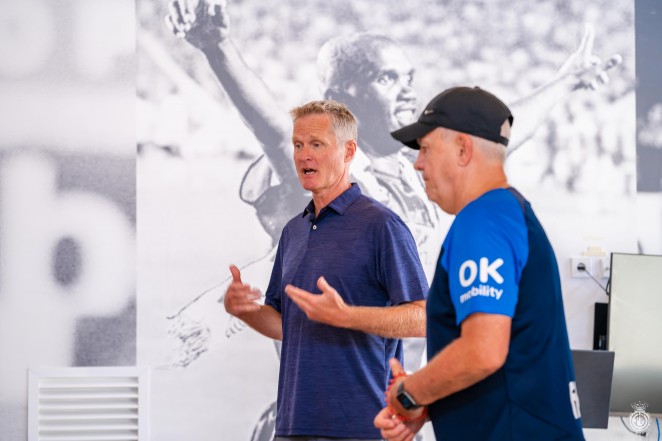 Mallorca today received a very special visit. That of a legend of the sport. Steve Kerr, winner in the NBA of five rings as a player and four as

Mallorca today received a very special visit. That of a legend of the sport. Steve Kerr, winner in the NBA of five rings as a player and four as a coach. Kerr, who is on vacation on the island and is a personal friend of the president Andy Kohlberg, has visited the Sports City and has witnessed the training of the first team.

The coach of the Golden State Warriors, who This year he has won his fourth NBA championship title as coachhas followed the session of Javier Aguirre along with President Kohlberg and Counselor Graeme Le Saux as well as with the football director Paul Ortells and CEO of Business Alfonso Diaz. After finishing the training, he was able to meet the entire squad and coaching staff and hold a conference for all of them. in the talk, Steve Kerr He has confessed his passion for soccer and wanted to highlight the similarities that two team sports such as soccer and basketball have for him.

On the other hand, the North American coach also wanted to explain what his philosophy is as a coach, that he likes his teams and players to have fun on the pitch but at the same time compete. “Our job as technicians is to find a balance between both things, enjoying ourselves as children but competing as professionals.” Kerr wanted to give you the example of the Warriors player, Stephen Curryone of the best in the league, and that «He enjoys shooting, running and even when he has to be on the bench, he enjoys watching his teammates play and compete. You see him play with a smile».

Kerr has also given some details of his facet as a coach after a successful career as a player in which he did not always have the same role. «I played 15 years in the NBA in which I won five rings. I was almost always a reserve, sometimes I played more than twenty minutes in a game and sometimes I didn’t play at all. But always with the enthusiasm of being there. That is why as a coach I understand those who do not play on my team. The entire squad followed Kerr’s words very carefully, and he did not hesitate to take photos with all of them.

Steve Kerr began his career as a player in the NBA with the Phoenix Suns, where he spent one season. His time of greatest success came from the hand of Michael Jordan’s Chicago Bulls, where he won three rings in a row. Later, he signed for the San Antonio Spurs, where he won his last two rings as a player.

Kerr is, to this day, the player with the best three-point shooting percentage in NBA history. His coaching career is also littered with success, with the four championship titles he has won with the Golden State Warriors. Currently, he is also the United States national team manager.

NBA: Shaquille O’Neal on Kyrie Irving and his stance on vaccines: “Get your ass out of there now”
NBA: The G League is too small for Santi Aldama
All set for the NBA season
NBA 3460