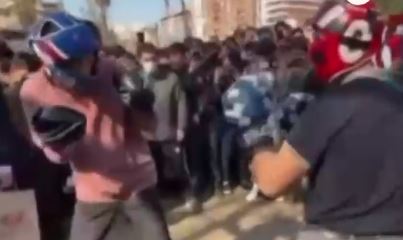 At the end of June, a record captured on Thursday in which a group of school students is

At the end of June, a record captured on Thursday in which a group of school students is seen when they held a boxing tournament on the Paseo Bandera went viral. Now, new fight records were shared but in the Almagro Park.

In the recordings show students dressed in uniforms from various schools in the sectorto which they even came with boxing gloves and head protectors.

When warned by neighbors, they alerted Carabineros of what was happening. When the police arrived, they moved towards the Bandera level pass, again. As recorded in the recordings.

Altogether they were about 200 students those who were in the park were spotted by the uniformed men, who asked them to leave the place over the loudspeaker.

According to what was indicated by Contigo en la Mañana Chilevisionwould be students of the National Institute and of Barros Arana National Boarding School (INBA).

East new episode of street fights that took place on Thursdayalmost three weeks after the first episode captured in the center of Santiago, in which secondary actors were also involved.