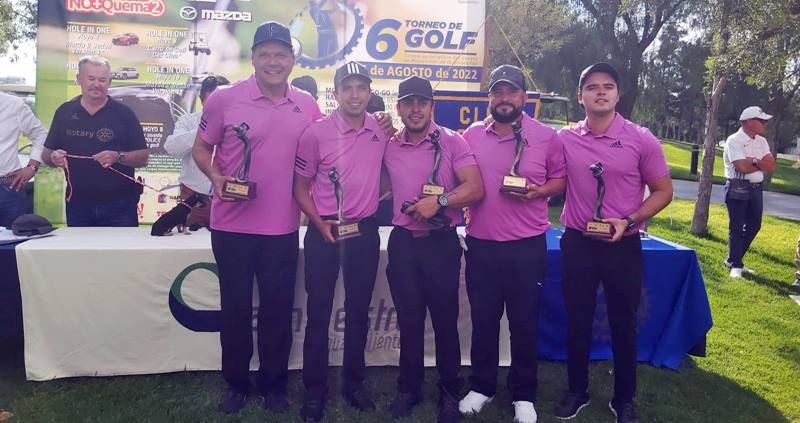 This Friday an exciting organized golf tournament was played between the Rotary Club of Aguascalientes and El Campestre in what was a team competition that was extremely exciting with several important names in local golf fighting inch by inch for the first places.
Being a team modality, the golfers had to trust their partners regardless of whether they had a good individual participation, which culminated in a couples competition that was of high quality for the athletes who were participating. In the end, the team made up of Marco Antonio del Real, Cristian Sánchez, Javier Romero, Brandon Mora and Pablo Giacinti won first place thanks to the accumulated hits they had as a team, beating the other squads.
The second place was taken by the group made up of Gabriel Espinosa, Gerónimo Espinosa Name, Eduardo Langle, Luis Ramos and Jesús Rivera. Both teams were awarded prizes at the end of the competition and had a special time sharing advice on the field and shooting technique in different situations to close this express competition with a flourish that was beneficial for all the competitors who had a great experience thanks to Rotary Club and Country Club.

Loading...
Newer Post
It’s not just football: Sergio Ramos and his great passion outside the ball
Older Post
Penalties in Formula 1: why there were new changes at the start of the Belgian GP