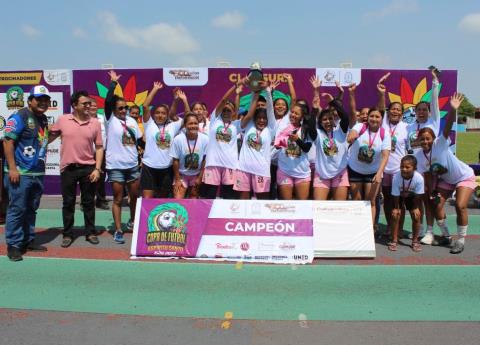 With great success concluded the "Soccer Cup 500 Years of the Villa del Espiritu Santo", fair sporty in which about 78 participated local teams, re

With great success concluded the “Soccer Cup 500 Years of the Villa del Espiritu Santo“, fair sporty in which about 78 participated local teams, regional and the state of oaxaca.

This Sunday, June 12, the official closing took place at the “Rafael Hernández Ochoa” sports field, where the winners of the nine categories that faced each other from June 8 to 12 on different courts in the city were awarded.

The Twelfth Councilor, Octavio Paz Castilla, stated that the Cup was part of the celebrations of the Villa del Espíritu Santo Foundation, fulfilling its objective of promoting sports and reinforcing ties and family unity, exceeding the expectations of the Organizing Committee .

“Fortunately we had a very good productive cup that took place from Friday to Sunday, which were the finals and where the team from oaxacawho left happy with a good taste in their mouths from the organization and the development of all the matches,” he said.

In this way, the City Council chaired by Amado Cruz Malpica, through the Twelfth Regiduría, in coordination with the Municipal Sports Committee directed by Roberto Pérez López and the Fourth Regiduría with Yajaira Tadeo Rodríguez, will continue working for the benefit of sport and health of the porteños.

«The day was developed with a good atmosphere of soccer, family life and healthy recreation; I thank the sponsors for their support, this is an example that the work between the Government and civil society pays off”, remarked the Regidor.

Congratulations to all the teams and the winning squads, which are:

Note: The minors that appear in the photos in this newsletter have the permission and authorization of the parent or guardian and coaches in accordance with circular CIR-UT/003/2020.

In the terms established by law 316 on the protection of personal data, obligated subjects and in compliance with the Law of Girls, Boys and Adolescents of the state of Veracruz. Articles 8, 74, 75 and 76.