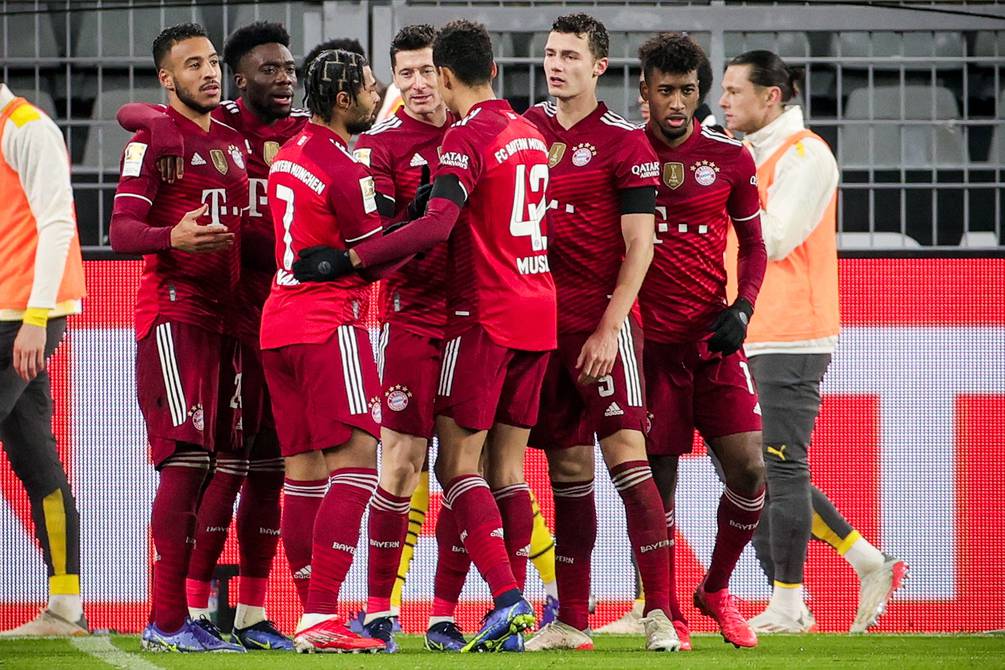 Check out the highlights of a very interesting weekend in European football.David Moyes' West Ham, who toppled Chelsea from the lead to the benefit

Check out the highlights of a very interesting weekend in European football.

David Moyes’ West Ham, who toppled Chelsea from the lead to the benefit of Manchester City; the escape of Real Madrid in the leadership of a League that runs the risk of leaving the fight for the title without emotion, with surprising defeats of Atlético de Madrid and FC Barcelona; the difficulties of Paris Saint Germain to draw a tie on the hour, with new criticism of Leo Messi; Robert Lewandowski’s double that gave Bayern Munich the victory in the visit to Borussia Dortmund; and the new leadership of AC Milan in Serie A after the defeat of Napoli have been the highlights of a very interesting weekend in European football.

West Ham is the ‘nightmare’ of the greats; City is the new leader

London-based and founded in 1985, although re-founded in 1900 with its current name, West Ham is undoubtedly one of the illustrious modest players in the Premier League, a competition that it has never won, but instead is one of the English clubs that can claim to have conquered all a European competition: the now defunct Recopa in the 1964-65 campaign.

Those were years when the team was called the ‘Soccer Academy’, due to the large number of very good players who came out of its quarry and who gave it its first title (English Cup) in 1964, one of them the glorious Bobby Moore . Then came years of declines and promotions.

In the current campaign it is being the most pleasant surprise and the scourge of the ‘greats’. He has already left Manchester City and Manchester United by the wayside in the English League Cup, and in the Premier League he has defeated Liverpool and Chelsea that this Saturday lost their leadership in the visit to the Olympic Stadium (3-2).

He won by coming back twice and settling the game with a strange goal from the Congolese Arthur Masuaku, which leaves the doubt as to whether he wanted to cross or shoot at goal. Whatever it was, the ball ended up at the bottom of the nets (87 ′), and West Ham took three points that put them in the Champions zone.

The ‘favor’ was not wasted by Pep Guardiola’s Manchester City, who hours later won with great ease at Watford (1-3), with two goals from the Portuguese Bernardo Silva. He is the new leader, with a point of advantage over Liverpool, who won on Wolves (0-1) with a goal from Belgian Divock Origi in the 94th minute, and two over Chelsea.

Real Madrid on the way to ending LaLiga very soon; defeats of Atlético and FC Barcelona

If the fight for the title in the Premier burns, in LaLiga it is increasingly glacial. Matchday 16 was awaited with great attention, as Real Madrid, the leader, was visiting a Real Sociedad that became first for several matches and that if they won, they placed second.

Meanwhile, Atlético de Madrid and FC Barcelona, ​​despite playing their being or not being European next week, apparently had affordable matches on their respective pitch. Prestige positions could be expected to tighten. It was not so. The Madrid gap is even greater.

Saturday afternoon began with the defeat at the Camp Nou of FC Barcelona against Real Betis (0-1) of Chilean coach Manuel Pellegrini, who stopped the Xavi Hernández effect. Then, Atleti del Cholo Simeone fell in the last moments against Mallorca, despite getting ahead on the scoreboard (1-2).

Betis propitiates the first fall of Xavi Hernández as coach of FC Barcelona, ​​at the Camp Nou

Real Madrid, already at night, knew both results. He started in San Sebastián, land where the locals had not yet lost and had only conceded one goal, with the tranquility of knowing that a ‘puncture’ was not serious and aware that a victory made him fly made an almost sidereal favorable difference for them heights of the competition.

And perhaps the best Madrid of the season appeared. Aware, good support between the lines, dominating concentration and self-confident. This despite the early loss of injury to Karim Benzema, his scorer and great bulwark.

La Real stood up in the first minute, but then went in tow, especially in the second half. Once again, the Brazilian Vinicius was the nightmare of the rival defense, this time well helped by a Serbian Luka Jovic -he left for the injured Frenchman- that Real Madrid believed disappeared. Both shared the goals of the victory (0-2), the first by Vini with assistance from the European, the second by the latter.

Real Madrid flies in the lead. It is proven by the eight points of advantage over Sevilla (second), who suffered to defeat Villarreal; the nine on Real Betis; the ten on Atlético de Madrid; and the sixteen on the FC Barcelona that is seventh.

PSG suffers to draw a draw against Lens; Messi discussed

PSG does not fuel what is expected. He is an unquestionable and outstanding leader in Ligue 1, but he suffers and takes out the games with difficulties; and that having a championship where his second ranks would also be favorites for the title.

He was visiting Lens without the injured Neymar, with Mbappé on the bench to give him rest and with Leo Messi, five days after receiving his new Ballon d’Or, on the pitch. The Argentine was somewhat opaque, the team was outmatched by the rival and was behind on the scoreboard at game time.

There was no reaction and Mauricio Pochettino had to remove Mbappé in the 70th minute in search of solving the problem. The Frenchman was close to the draw, he revitalized Messi somewhat, and assisted Georginio Wijnaldum so that in 91 he scored the final draw (1-1).

PSG escaped defeat and is within a comfortable eleven point distance of their immediate pursuer, but criticism is mounting. And one of the objects of them is Messi, who seems to find it difficult to adapt.

Bayern Munich takes hold at the top thanks to Robert Lewandowski

The Polish Robert Lewandowski, who on Monday was second in the fight for the Ballon d’Or, and to whom Messi himself elegantly nominated to be given the award that could not be granted due to the covid pandemic in 2020, does not stop. Two of his goals gave Bayern Munich a very important victory in the visit to Borussia Dortmund by Erling Haaland (2-3) in the star game of the Bundesliga and with the leadership at stake.

Lewandowski, who opened and closed the scoring for his team, already has 16 goals in the fourteen games that they have been. And at 33 he won the personal duel with which his strongest successor, the Norwegian Haaland, 21, scored the momentary 2-2. Bayern reaffirms their leadership, already with four points over Dortmund.

Serie A has a new solo leader: AC Milan. The milanistas easily beat Salernitana (2-0), with the two goals already scored before the 20th minute, and they dedicated themselves to thinking more about the next Champions League match, in which they play the pass to the round of 16.

In addition, they benefited from Napoli’s first home defeat of the season, which with several absent due to injury, fell at the Diego Armando Maradona stadium against Atalanta (2-3). La Dea (‘goddess’) is still the funniest team in Italy.

Now, the Neapolitans are third, two points behind AC Milan; Inter sneaking between them, who overwhelmed Jose Mourinho’s Roma at home with a 0-3 that was already on the scoreboard at halftime. (D)

Loading...
Newer Post
Manchester United climbs to sixth place in Premier Soccer League
Older Post
International Soccer | Colo Colo is part of the clubs that have never been in the Second Division