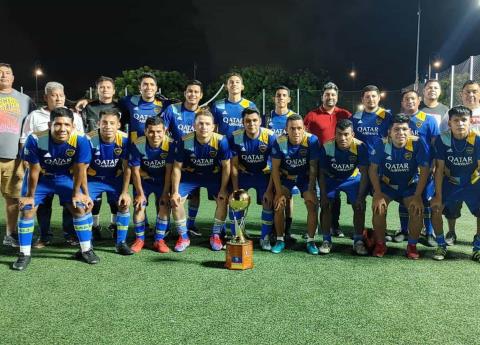 Syprom expired 4-1 a Manchesterto proclaim himself champion of the Free Tournament on Thursdays of the League of the Port of football 9in Final disputed on Thursday night at the Fernando Pazos Sosa Children’s Sports Unit (former Parque España) in Veracruz.

The now monarch of the tournament on Thursdays, reached the Final after finishing in second place in the regular tournament, while Manchester He finished in fourth place.

In the semifinals, Syprom defined his pass to the duel for the title in a series of penalties, beating Barrio Fino 7-6. As long as Manchester accounted 2-1 for Drogados FC.

Already in the duel for the title, Syprom He was forceful against the rival goal, in addition to the fact that his goalkeeper, Roberto Venegas, had successful interventions to prevent damage to his goal.

Manchester He tried to do damage in different ways, but this time his striker, Leonardo García Rodríguez, by the way, the tournament’s individual scoring champion, did not find a way to help his team.

Jonathan Jair on a couple of occasions, one more from Carlos Valencia and another goal from José Armando, wrote the scoreboard in favor of Syprom. Miguel Sordo, captain of the Manchesternoted the one of honor.

David Trujillo and Armando Acevedo, sanctioned the actions of the Final of the Thursday Free Tournament of the League of the Port of football 9.

Benito Martínez Peña, president of the aforementioned league based in the Fernando Pazos Sosa Children’s Sports Unit (former Parque España), presented the champion and runner-up trophies to Syprom and Manchesterrespectively.

In addition, Leonardo García Rodríguez, who with 24 goals, was crowned individual goalscoring monarch of said contest.