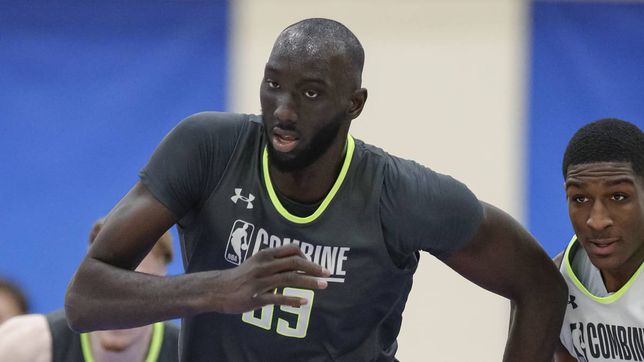 The stage in the NBA is over for Tacko Fall. This 26-year-old Senegalese also leaves the honorary position as the tallest player in the North Amer

The stage in the NBA is over for Tacko Fall. This 26-year-old Senegalese also leaves the honorary position as the tallest player in the North American league. The 2.29 meters tall of him is transferred to another competition after he has not found a new contract to continue his sports career there. Shams Charania (The Athletic) advanced on Wednesday afternoon its incorporation into the CBA, the Chinese national league. Xinjiang Flying Tigers was pending his case and the player has already chosen to head to Asia. In the team he will become a sensation, not only because of his status as a foreigner but also because of the athletic conditions he possesses.

Fall was not selected in the 2019 Draft, which he submitted to, after being discovered by the UCF Knights. In the university league he had an expected encounter with Zion Williamson, who was number one in his class. Despite not being chosen among the top 60, the Celtics gave him a chance and there he began his journey in the League.

Always hand in hand with the G-League, the secondary competition in which the less usual have more opportunities to play. In addition to Boston, he has also been to Cleveland. It has been three years in the best league on the planet, although his contribution in the matches has not been as great as he promised.

In regular season, joining the three campaigns, he has only played 37 games. His averages are 2.2 points and 2.4 rebounds in 6.2 minutes.

NBA cheat or mistake?: One of the hoops in Boston was higher than allowed | Sports
Play In NBA 2022: what it is, how it works, dates and which teams play it
Rumors NBA: New team enters the bidding for Russell Westbrook
NBA 3440