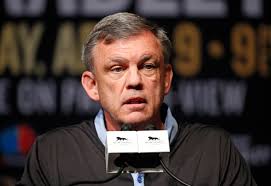 Teddy Atlas has praised the skill in the max holloway boxing inside the octagon. Former UFC Featherweight Champion Holloway has been considered

Teddy Atlas has praised the skill in the max holloway boxing inside the octagon.

Former UFC Featherweight Champion Holloway has been considered one of the best boxers in mixed martial arts by various fans and experts of the sport. He has also landed the most strikes in the history of the world’s largest MMA promotion.

Speaking in the latest edition of the podcast The Fight , Atlas insisted that Holloway’s attacking game is elite. He added that interim UFC bantamweight champion, Petr Yan , was also on a similar level.

«Holloway is a tremendous, tremendous elite boxer. I mean it does it all. He is very complete and has shown it many times in the octagon. But him and guys like Yan to me, I’ve said it before and I’ll say it again, if I walk into a room and there’s no graphics and I’m looking at a monitor, there’s no sign telling who’s who and I see Holloway or Yan hitting, I’d think I’m watching a fight [boxeo] professional. I think that’s how good they are at breaking records because… you’re just watching good boxing.”

‘Blessed’ is 23-6 in his professional MMA career thus far and last fought Yair Rodriguez at UFC Vegas 42 in November of last year. He won the match by unanimous decision.

However, it’s definitely not the end of the road for Max Holloway. ‘Blessed’ is the No. 1 contender in the UFC’s 145-pound division and is the No. 7 ranked pound-for-pound fighter for men.

Holloway, who has never been knocked down inside the Octagon, could possibly be back to full form by the third quarter of 2022. He remains in contention for a title shot and will likely face the winner of Alexander Volkanovski vs. Chan Sung Jung next.