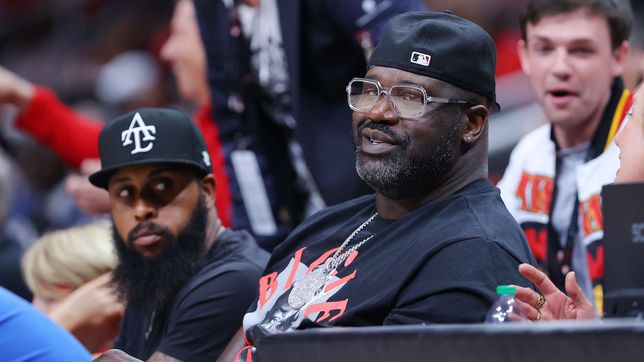 Shaquille makes his appearance again. A figure, a cool character and an analyst (to call him in some way) who shows off his usual verbiage wheneve

Shaquille makes his appearance again. A figure, a cool character and an analyst (to call him in some way) who shows off his usual verbiage whenever he can. The former Magic, Lakers, Heat, Suns, Cavaliers and Celtics player has been questioned and has responded. If he recently jokingly assured that he would train the Lakers for 25 million dollars a year (no NBA coach reaches that figure), now he has charged Rudy Gobert. And all because they have told him that the Wolves center would leave him with only 12 points in a game, something that rarely happened when Shaq was at his peak and dominated the NBA with an iron fist.

Rudy Gobert is one of the few traditional centers left in the current NBA and an excellent defender, who protects the hoop very effectively and during his time with the Utah Jazz he won the Best Defender award up to three times (2018, 2019 and 2021), something that leaves only one trophy behind the historical record shared by Dikembe Mutombo and Ben Wallace. His situation in the Jazz was delicate, the project was doomed to the dissolution of the couple he formed with Donovan Mitchell, with whom he has had friction on more than one occasion, and finally the Frenchman was transferred to the Minnesota Timberwolves, where he will continue his NBA career.

One way or another, Shaq has been quick to respond to anyone who suggests Gobert would drop him to 12 points in a game. “In 12 points? Yes, in the first 3 minutes of the game ”, assured the former player, once again demonstrating his impressive personality. “Let me tell you something, man. It’s against my religion for someone to stop me in a one-on-one. I take it personally. On the first play of the game I always used to look and see what the defense was going to do, ”he added in statements collected by Basket News. Gobert has answered something like that he can “clean his ass”. The Wolves center was already the target of Shaq’s criticism when he signed a $200 million extension. This time, the softest thing he has said to her is that “I wonder what French roast chicken will taste like…”. That is, the shots have gone the same way. One more time.

Philadelphia 76ers – Miami Heat, live
This is the Philadelphia 76ers squad for the 2022/23 NBA season
NBA: The ‘new unicorn’ of the NBA is broken: Chet Holmgren, the player never seen for his height, mobility and weight
NBA 3508

Loading...
Newer Post
Usyk and Joshua include The Ring belt that belonged to Tyson Fury in their fight
Older Post
NFL: The touchdown that demonstrates the power of the Super Bowl champions