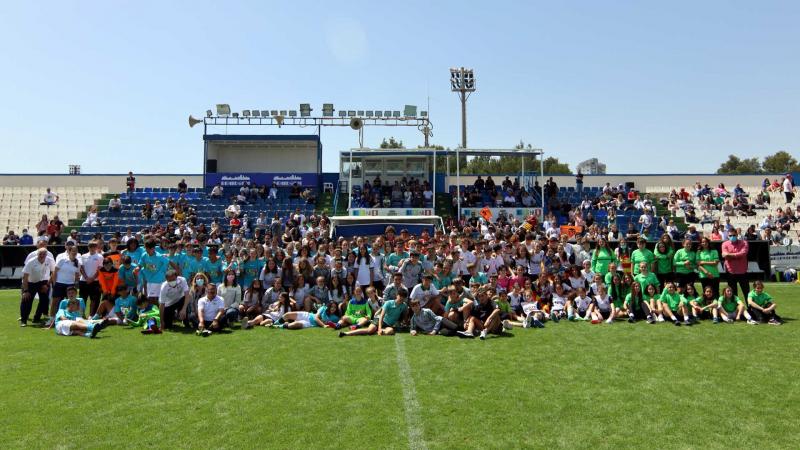 The 36th edition of the 'Villa de Benidorm' tournament ended today after giving the fans two days of the best grassroots football. An edition that

The 36th edition of the ‘Villa de Benidorm’ tournament ended today after giving the fans two days of the best grassroots football. An edition that has brought together eight men’s and women’s teams at the Ciudad Deportiva ‘Guillermo Amor’, including a Local Selection of players from Benidorm and the girls from Atlético Benidorm CD. Precisely, the players trained by Mª Carmen Gutiérrez Coca have won second place in the female Junior-Cadet category, after losing in the final against Valencia CF. Córdoba CF has achieved third position after beating the Elche CF women’s team.
In the men’s youth category, the final victory was also for Valencia CF. Córdoba CF, Atlético de Madrid and the Benidorm Local Team have completed the positions of the quadrangular tournament.

During the two days of the tournament there have been numerous fans who have come to the facilities of the Sports City to enjoy the women’s and men’s grassroots football, including the mayor, Toni Pérez, and the Councilor for Sports, Mariló Cebreros.

Cebreros has been in charge of delivering the trophies to the winning clubs, as well as to the two local teams, accompanied by members of the Corporation.

In addition to the team trophies, the ‘Villa de Benidorm’ has also recognized the most outstanding players of the tournament. Thus, Ana Sáez from Valencia CF has been named best player in the competition; while the trophy for top scorer went to Yulán Ferrer, captain of the ‘ché’ team, and the goalkeepers of the same team, Gema Pastor and Ana Daniela Navas, were the fewest goals scored in the tournament.

In the men’s category, the best ‘Villa de Benidorm’ player was Kike Milan, from Valencia CF, a club that has also won the individual trophy for the top scorer for Héctor Perales and for the goalkeepers with the fewest goals, Iván García and Saturnino Lojar , who have closed the competition without conceding any goals.