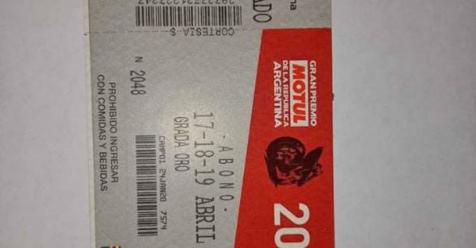 04/05/2022 - 01:35 Police The woman who was arrested last Thursday, accused of having tried to market a ticket for the MotoGP over the

The woman who was arrested last Thursday, accused of having tried to market a ticket for the MotoGP over the internet that was held over the weekend at Las Termas, which was prohibited from being sold, was benefited by a statement from her defense and He regained his freedom, but is still linked to the investigation.

On Thursday, police officers broke into a home in the 25 de Mayo neighborhood of the thermal city, and proceeded to arrest Cindy Celeste Leal, 34, accused of the alleged crime of fraud.

Leal had been targeted by the prosecutor in the case, Dr. Rafael Zanni, and the police, following a complaint from an employee of the firm authorized to sell tickets, “Ticketek”, who stated that they had detected that the suspect offered through Facebook the ticket for $20 thousand.

It was a protocol entry, so its marketing was prohibited. The woman was arrested, but her defense filed a habeas corpus, since she is the mother of a minor who is in her care, so yesterday the Judge of Control and Guarantees ended up making room for the proposal and granted her release. . However, the sources indicated that the criminal process continues its course, even with the accused free.

Loading...
Newer Post
Play in NBA 2022: what it is, how it works, dates and which teams play it
Older Post
Toluca: Oscar Vanegas, sentenced by Ignacio Ambriz