The ambassadors of LaLiga ask for the corridor to Madrid: “It’s time to teach how to win and lose” 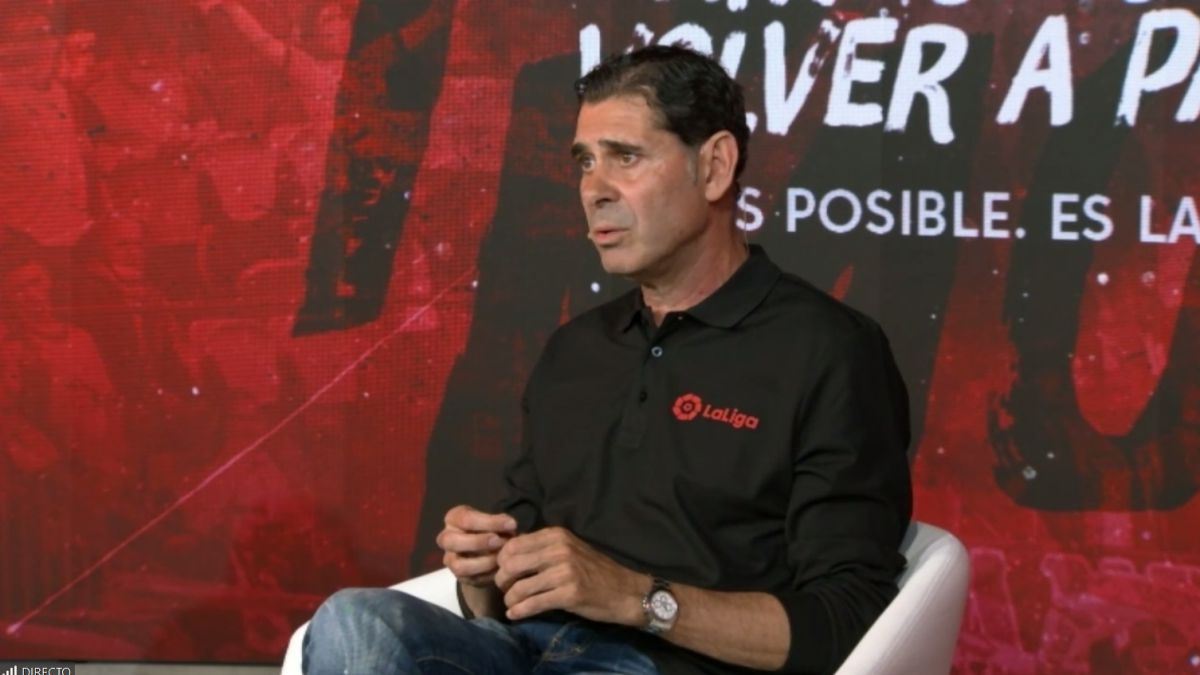 The ambassadors and ex-footballers of LaLiga analyzed the end of the season that the First Division is experiencing. Real Madrid has already been

The ambassadors of LaLiga ask for the corridor to Madrid: “It’s time to teach how to win and lose”

The ambassadors and ex-footballers of LaLiga analyzed the end of the season that the First Division is experiencing. Real Madrid has already been proclaimed champion, but the fight to go to the Champions League, Europa League and Conference League, as well as salvation, is still very much alive. Fernando Hierro, Luis García, Gaizka Mendieta, Marcos Senna and Guti spoke about it.

All the former players and legends of the LaLiga clubs agreed to highlight the figure of Real Madrid and Benzema, for the League title, but there was also unanimity in Betis and Pellegrini: “It has given them a dynamic that is passionate even in Europe”. In addition, they all agreed in this week’s debate and would make a corridor to Real Madrid, despite the fact that Atlético has announced that they will not: “It’s a show of respect to the champion.”

Working day: “This weekend a lot is going to be decided in LaLiga. There is a well-deserved league champion. Madrid is a worthy champion. I see Betis with options to go to the Champions League. They play without pressure and it is dangerous for these last four journeys”.

Feature a team and player: “I prefer Betis, Benzema and Pellegrini. He is an excellent coach and has good taste in football. I met him at Malaga. I am very happy for him.”

Corridor: “I think it’s a sign of respect. Getafe did it against Betis. I’ve done it to other teams and they’ve done it to me. You have to give it naturalness. I don’t understand why it has been distorted. Life is for learn and be an example. Football transmits values ​​to children and one is respect for the winner. Football is to be exemplary”.

City: “From time to time things happen at the Bernabéu. The stadium comes to a boil and the illusion is transmitted to all the players. Madrid always gets up and reinvents itself”.

Fall out of Champions: “They have larger budgets. It would be a very important setback for economic reasons and for everything they represent. It is a priority objective for them and it would be a blow.”

Selection: “After 2018 there is a generational change. Luis Enrique has made this change fantastic. The European Championship and the League of Nations have been very good for him to see what they can achieve. They have very clear concepts. The National Team is sufficiently prepared for Qatar, also psychologically.

french talent: “They have recently been world champions. France has always worked very well in the lower categories. It has a market in Belgium, Morocco and Tunisia. Nobody gives away a World Cup and French football has a lot of talent. French players play in the best teams in the world. They have a large market and they adapt to playing in Spain, Italy, Germany…”.

Marcelo: “He is the player in the history of Real Madrid with the most trophies, above Gento. I love what he transmits. He has an unusual natural talent. I would like, as a Real Madrid player, for him to close his professional stage at Madrid He has filled the gap for Roberto Carlos with a lot of quality.”

Protagonist of LaLiga: “Ancelotti has given the team the necessary peace of mind. Courtois has saved many games when Madrid have not been very good. Benzema is the best striker in the world and a possible Ballon d’Or winner. Vinicius is the spark. But this League has won everything the team”.

Feature a team and player: “The easy thing would be to say to Madrid and Benzema. But I am going to say to Betis, that it has been one of the surprises. Pellegrini’s work is above the players. He has given him a dynamic that is passionate even in Europe”.

Corridor: “I would do it, whatever the team. We’ve already talked too much, congratulate Real Madrid”.

Villarreal: “They face a very difficult opponent, Liverpool are in the Top 3 in Europe. They have a brutal commitment, but it’s complicated. It could be that Villarreal scores soon and everything changes in a minute. Everything is possible”.

Motivation knowing that he is already League champion: “They are professionals and they owe it to football. Not only is their prestige at stake, but also that of the club. They must play well and seek to win the three points. Not be involved in whatever is in the fight. Whether against Atlético or Betis does not have to look at what can happen and try to win the three points.”

Benzema: “He has a lot of football. I didn’t expect his goalscoring performance. He has gone from a medium level to a high level in nothing. It has benefited Real Madrid. With Cristiano’s departure, goals were needed and he has taken that step forward”.

Marcelo: “In Madrid he has already done everything. We have to see if he wants to be more of a protagonist or not. If Madrid signs Rudiger, it is that you think they can put Alaba on the side and Marcelo may have less prominence. It depends on the”.

Liverpool and European League fight: “It’s a very important game. We are aware that we are also playing a lot in LaLiga. Our fight is against Real Sociedad, Betis is further away. As long as we have the chance to fight for the Europa League, we are going to do it. The Champions League is a long way off. We have a coach who is an expert in that. They are going to fight and give everything until the end. As against Liverpool, as long as there are options, we are going to fight”.

Highlight a team and player: “I should highlight my team. Villarreal has great passion and is in the semifinals of the Champions League and is fighting in Europe. I would also highlight Pellegrini’s work. He is an expert in European competitions. The truth is that I am not surprised. He deserved to be highlighted in Spain and win a title. If I have to keep one player, Benzema. I really like Rodrygo, who has given a lot. At a manager’s lunch, I told Florentino that I liked Rodrygo more than Vinicius. On a technical level I liked him more. It is true that Vinicius is at a very high level and I would want both of them in my team”.

Danjuma signing: “He’s a crack. He’s having a very good season. I hope he stays with us much longer.”

Team: “I really liked Betis, Sevilla, Osasuna and Villarreal. In terms of players, I’m glad to see so many national players like De Tomás, Juanmi or Aspas. There is a lot of talent in all the LaLiga teams”.

French talent: “It’s a country that works very well with its lower categories. They can develop their football beyond individual talent. When you want to grow, you want to be in the best clubs and that’s why LaLiga is a good destination.”

Barcelona and Atletico: “I’ve seen them behind Real Madrid, which has had continuity. Barça hasn’t managed to have that rhythm. Atlético started fairly well but then stumbled on some teams. The end of the season is going to be very exciting because of the fight for Champions positions”.

Feature a team and player: “I stay with Sevilla. They lacked a bit of gas in the final stretch. They had a great season and they challenged Real Madrid for the league”.

Corridor: “These are values ​​that are being lost. It’s a good time to teach how to win and lose. You have to visualize it from the teams. It hurts us more than others. But it makes you great to make that corridor.”

Xavi: “He has done a very good job despite the fact that the results have not come. He has a bright future. Everything that comes from now on has to be good. Some more signings have to come. I have enjoyed many games. I see an important future “.

Record in Barcelona: 91,553 spectators in women’s football
“As a football lover, I wouldn’t doubt it”: the Sanhedrin’s argument for not giving Benzema the Ballon d’Or | The spar
At the door of the Indoor Soccer qualifiers – Sports Center
FOOTBALL 2736

Loading...
Newer Post
What is the most complicated fight of ‘Canelo’ in his entire career and who was it against?
Older Post
UFC Vegas 53: why Marlon ‘Chito’ Vera will not be able to enter the octagon with the flag of Ecuador? | Other Sports | Sports