The Aprilia wall vibrated with Aleix: “Show of strength” 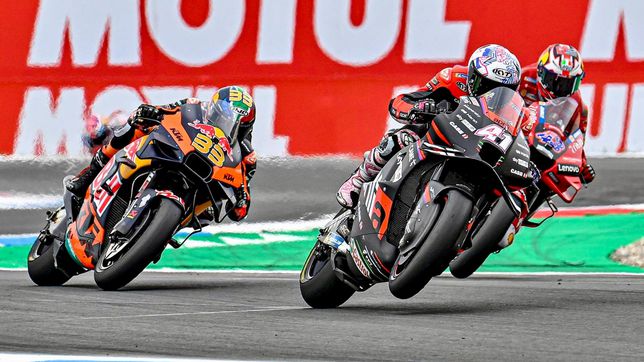 Rarely, or even never, has any team celebrated a fourth place from the wall like the one achieved by Aleix Espargaró in the Assen MotoGP race. Eve

Rarely, or even never, has any team celebrated a fourth place from the wall like the one achieved by Aleix Espargaró in the Assen MotoGP race. Everyone considered it a success to return to the track from the gravel and climb from fifteenth place to sixth, but what nobody counted on was the final icing, with a double overtaking of his driver at the chicane from entry to the finish line, over Binder and Miller, to finish fourth and thus earn three more points in his fight for the title with Quartararo, from whom he is now separated by 21 points instead of the 34 he had before the Dutch event.

Antonio Jiménez, Aleix’s technical manager, was one of those who celebrated from the Aprilia garage with arms raised as soon as the race was over: “We really enjoyed the podium, but Assen is a show of strength and we know we can win. He looks invincible now. I’m sure we’re going to win races and fight for the championship”.

Aprilia vibrated with the race of his Capitano and Jiménez expressed his chest: “I don’t know if it was Marc Márquez disguised as an Aprilia rider, but what happened was a bit sad, because it showed that we had the pace to win the race. Before it started, we knew we were in the top three, but with the pace that followed it was clear that Aleix was the fastest. That remains.”

This is how Toni the Belgian analyzes what happened in Assen: “The good thing about it is that he didn’t fall when he hit Quartararo and that he got out of the gravel as quickly as possible. I don’t know how he did it, because the bike sank quite a bit, but he managed to get back on the track, he closed his eyes, his vein swelled and he knew that he had a bike to do something good. He had nothing to lose, because when you’re out of the points all you want is to get anything. The bike responded very well and Aleix, who is a guy who normally cuts 20% if four drops fall, this time he put up a seventh gear that is not on the bike”.

An important detail: “Aleix did some incredible times, with record after race record, and totally took the spotlight from the winner by finishing fourth. Anyone who sees a race like this doesn’t pay attention to the one in which he is only in the lead, but to the one in which he is fifteenth and makes a comeback like this, to finish one second off the podium. It’s amazing what he did.”

The loot was extraordinary: “If there hadn’t been a contact with Quartararo, the two would have finished on the podium and the points cut would have been less than the 13 that he has taken away like that. We’re down to 21, which is less than a race, and super happy to see that we’re a strong team. Right now we are the strongest team. The fact that Maverick has made the podium gives us even more strength, because it means that he has already arrived and that he can help us in the fight for the title. The next goal is to do first and second”.

And when it comes to staying with an overtaking, Antonio Jiménez is clear: “The most beautiful of all is the last one, because it also came in a mythical place in Assen, releasing the brakes at the chicane. There have been many spectacular last-lap overtakes at Assen, but this one will go down in history forever, because it happened not to one but to two. He did it perfectly and the bike behaved perfectly. He pushed her to the limit and she’s still amazing. Super happy and proud.”

Classification of the MotoGP World Championship before the Spanish GP
MotoGP | Pol: “The circuit is not at the level”
all drivers have won a Grand Prix
MOTOGP 702

Loading...
Newer Post
NBA 2022: Donovan Mitchell to the Knicks? The Utah Jazz begin negotiations to trade their other star
Older Post
Carlos Santana trains full and would fight outside the country